Home OPINION Why is India still plagued by 1962 syndrome?
OPINION

Why is India still plagued by 1962 syndrome? 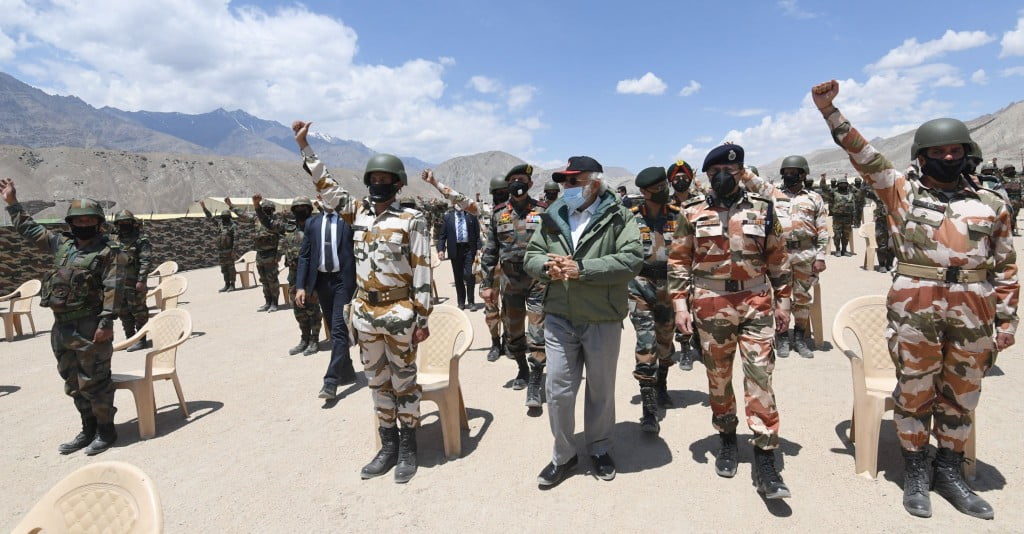 Indian PM Modi was recently at Leh-Ladakh where he addressed the troops. This had an outstanding effect on the troop’s Morale. This is a live example of leading from the front. However, in his address to troops, he did mention that days of Expansionist powers are over meaning China and now it is the development that is important. In his entire address while it was left to no doubt that he meant China, nevertheless he never mentioned the name of China Why? Congress party in India and even Pakistan adversely commented on it. Does it mean that when China has entered into Indian territory with force and with intentions of occupying our areas, we still do not want to name it as enemy No 1? Are we still suffering from 1962 Syndrome in which war we got a severe beating from China?

What happened in 1962 was the fault of Nehru then PM of India and his dream of Hindi-Chini Bhai Bhai. As a result of which he never modernized our Armed Forces who lacked even snow clothing and had 303 WW 2 rifles as against automatic rifles carried by Chinese. On top of its overall Command was given by our political masters read Nehru to Gen Kaul from Army Supply Corps who had spent most his life counting eggs. Then his intelligence Chief advised Nehru not to use Indian Air Force. India at that time had the latest Vampire and Toofani Fighter jets who would have changed the course of war since Tibet at that time had no fighter base worth it is salt and Chinese fighters could not have come from their mainland due to distance involved. It was this bungling and interference from our political masters that cost us this war in 1962. The world-famous Indian Army was defeated not because they lacked courage but because of our Neta log of Congress.

However, no such problem exists now but looks like this 1962 syndrome still prevails in the minds of our Neta’s. Where was the need for our PM Modi to announce from Ladakh that the Chinese Army has not occupied even an inch of our territory? Of course the very next day our MEA announced that Modi was only meaning Galwan Valley. However, the fact is that we are still not saying how much deep in Indian territory the Chinese Army has entered in East Ladakh in Depsang, Y junction, Gogra, Hot Springs, Pyongyang Tso area and Galwan Valley. Fact that they have entered is borne out by our demand in all our Lt Gen level talks, four to date, that China must go back to its 5 May positions. Are Bhai if we are demanding from China that it should go back then it is obvious that it has come forward from the LAC. OK if an enemy has decided to enter our area it can do so because we cannot be guarding our 3488 km of border with China all the time, so why hide the facts? Also, what stops us from entering the Chinese area where they are weak and then bargain? Simple we are afraid of China and still suffer from 1962 syndrome.

So far 12 boundary fixing talks with China have been held but of no result. Truth is that China does not want to decide this boundary issue with India because otherwise its nibbling game of our territory will get exposed. China every year does hundreds of boundary violations which we hide by saying that they have their perception of LAC and we have ours. The boundary with China is divided into Eastern, Central, and Western Sectors. Despite India’s demanding exchange of maps, except for Central Sector where China has no interest, China has not exchanged maps of any other sector. A strong country with high political will power would have told China that our perception of LAC is here and if you cross this LAC then you will be shot. But we have ensured that our troops do carry weapons but they cannot be fired why?

More than 40 years back, China had started building roads and other military infrastructure on our borders so that he can bring 30 divisions in a jiffy. As against this, we did not develop any infrastructure of ours on the Chinese border lest it helps China. Only after the arrival of the Modi Government on the scene six years back that we accorded priority to infrastructure building on the Chinese border and more than 70 Major projects will be completed by next year. Apart from Showing our cowardice this also gave the impression to China that we are pushing overs and can be tamed. Yes, after the arrival of the Modi Government some effort was made to tighten our China policy but more or less, we allowed old cowardice and fear of China to prevail on our Neta’s. Immediately on taking over in May Chinese President Xi, Xinping was swinging in a jhula in Gujrat when Xi Xinping was in India a large number of Chinese troops tried to enter India. It was Xi Xinping’s call to somebody in China that this charade stopped. We should have taken a lesson from this but NO this was followed by Wuhan’s spirit and Mahabaleshwar spirit. PM Modi Saheb has so far met Xi Xinping the President of China 18 times. We even allowed trade deficit from China so much so that While China exported to India 60 billion dollars’ worth of goods, Indian exports to China were pegged to about 14billion. China is not opening their markets to our exports then why we allowed them their export to us?

Indian strategists and defence experts have been warning our political bosses since ages that China is our main enemy, Even Defence Minister George Fernandes in Bajpai era said the same but our political masters of all hues believed in following the path of Diplomacy with China coolly forgetting that Diplomacy only succeeds only when it is backed by a strong military. Our Nets forget that every country has its intelligence and this episode of China happened now because they knew our military weaknesses. We are supposed to face a two-front war with China and Pakistan. To counter that we are supposed to have 42 fighter sqns of IAF, a Navy of 200 Ships, and a well-equipped Army. What we have is only 31 IAF sqns in that also 8 fighter sqns are of obsolete MIG 21 BIS. In Navy, we have 130 Ships and 13 rickety submarines with whom it can not be said with surety that if they dive will they again surface. In Army, though we have numbers now suddenly we are placing orders to the US for their rifles. We have 41 ordnance factories and DRDO also 8 Defence PSUs, all of them produce substandard items thanks to political interference. Now after this Chinese aggression we are fast track buying 3 billion dollars’ worth of equipment. Question is that when we had money why buy now? Why all this was not bought earlier? Then this Chinese aggression would not have taken place.

Be rest assured China has not come with all this force to go back. China is not interested in Galwan Valley and hot springs. Main Chinese interest lies in Depsang bulge and the plains which lead to its Karakoram Highway including DBO and Chumar. It wants to isolate us from its Belt & Road initiative in CEPC in Pakistan. It also has eyes on Siachen but it knows it can not counter the Indian Army there. So, what are the options for us? First, we must ensure that we remain militarily fighting fit all the time. Second, we must prepare for a two-front war including Cyberwar, and be ready all the time by fast-tracking and bringing our military to what is authorized. Third, we must recognize Tibet as an independent country with giving due recognition to the Dalai Lama Government in India. Fourth we must join QUAD at the earliest and give due importance to Taiwan including recognition. Fifth we must consider China &Pakistan as our permanent enemies for all times to come. Sixth we must force china to recognize LAC as we see it failing which we should not be afraid of a shooting war.  With more than 48 years passed let us get over this 1962 Syndrome and show to China and the world what India is all about. No Pussy Footing Please.