Take the cold tolerance of bacteria that thrive in arctic ice, add the ultraviolet resistance of tomato plants growing high in the Andes mountains, and combine with an ordinary plant. What do you get? A tough plant “pioneer” that can grow in Martian soil.

Like customizing a car, NASA-funded scientists are designing plants that can survive the harsh conditions on Mars. These plants could provide oxygen, fresh food, and even medicine to astronauts while living off their waste. They would also improve morale as a lush, green connection to Earth in a barren and alien world.

The research is being sponsored by the NASA Institute for Advanced Concepts (NIAC), which investigates revolutionary ideas that could greatly advance NASA’s missions in the future. The proposals push the limits of known science and technology, and thus are not expected to be realized for at least decade or more.

he plants would probably be housed in a greenhouse on a Martian base, because no known forms of life can survive direct exposure to the Martian surface, with its extremely cold, thin air and sterilizing radiation. Even then, conditions in a Martian greenhouse would be beyond what ordinary plants could stand. During the day, the plants would have to endure high levels of solar ultraviolet radiation, because the thin Martian atmosphere has no ozone to block it like the Earth’s atmosphere does. At night, temperatures would drop well below freezing. Also, the Martian soil is poor in the mineral nutrients necessary for plants to thrive.

“Our idea is to enable plants to survive on Mars by adding features from microscopic organisms called extremophiles that live in the most inhospitable environments on Earth,” said Dr. Wendy Boss of North Carolina State University. Boss and her colleague, Dr. Amy Grunden, also of North Carolina State, head the research team working on this project.

The team uses the techniques of gene splicing to remove useful genes from extremophiles and add them to plants. (A gene is a molecular instruction that specifies a feature for an organism, such as eye color, height, the ability to digest certain foods or resist toxins, etc.)

The current NIAC funding pays for “proof of concept” work that demonstrates the feasibility of the team’s idea and identifies the technical challenges that must be overcome for Martian plants to become a reality. 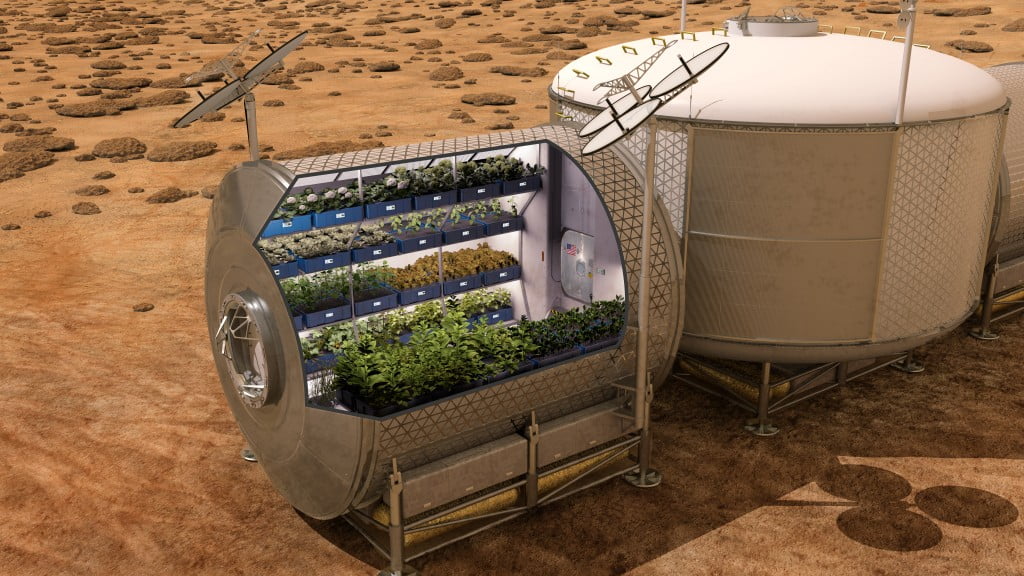 To prove their concept, the team took a gene from “Pyrococcus furiosus,” a microbe that lives in the scalding water issuing from deep sea vents, and inserted it into a tobacco cells. The gene, “superoxide reductase,” removes toxic oxygen atoms and molecules that are generated in organisms under stress. The gene was successfully incorporated into the tobacco cells and functioned without harming them.

The team plans to transform plants with genes for cold tolerance as the next step in their research. They also used their NIAC concept as an educational experience, giving undergraduate students at North Carolina State the challenge of selecting features from existing organisms that would be useful for Martian plants and designing ecosystems for Martian greenhouses.

“The features we are incorporating in Martian plants, like cold and drought tolerance, will also help crops bear severe weather here on Earth, so this work has practical application,” said Grunden.

“This type of long-term research, with an uncertain path to success, is only possible with an organization like NIAC that doesn’t mind taking a chance for the possibility of an incredible breakthrough,” added Grunden.

In medical parlance, dialysis is performed to remove excess water, solutes, and toxins from the blood of people whose kidneys cannot perform these functions naturally.
Read more
ENVIRONMENT

Human activities have increased the risk of natural disasters

The man according to his comfort zone is rearranging nature. The way technology is built up, resources are being consumed. This contributes to the vanishing of the environment.
Read more
Education

Teaching is an inherent part of her upbringing and present in her DNA. She started her professional career as an English teacher in various reputed DPS schools. Today Dr Rosetta Williams, the innovative and enterprising CEO, of Dalmia Vidya Mandir, is breaking new grounds in the Indian education system
Read more
International Business

Dr Malini Saba was born in a family of modest means. Her parents instilled in her a deep-rooted feeling of compassion and empathy for...
Read more
LIFESTYLE

The ‘ordinary’ women behind extraordinary deeds # 3

Only seven in 100 enterprises in India today are being run by women. As this and other studies suggest - women's empowerment, is just an empty slogan and the real impact on ground zero is an even bigger zero.
Read more
International News

The 1950 Treaty of Peace and Friendship laid the foundation of a harmonious relationship and "special relationship" between India and Nepal.
Read more
LIFESTYLE

International Women’s Day is an opportunity to reflect on progress made, and celebrate the acts of courage of ordinary women
Read more
National

Shashi Aggarwal not only donated plasma thrice in the past few months but also motivated others to do the same, saving 497 lives
Read more