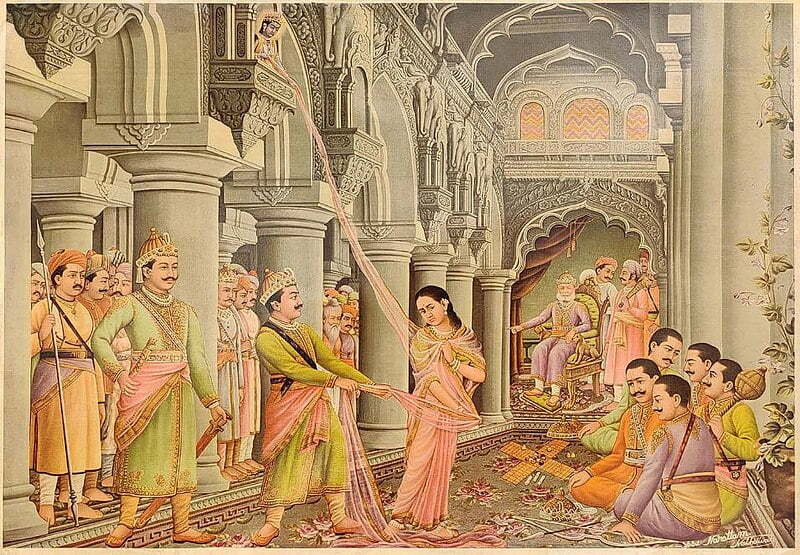 The poisonous volcano of hatred in Shakuni’s mind against Bhishma and the Kuru dynasty (discussed in the last article) burst when Yudhishthira was nominated successor to Hastinapur throne.

This proved to be a blessing in disguise and a “secret tool” in his hands to instigate Duryodhana. Shakuni went out of the way to provoke his nephew Duryodhana that he was the rightful heir to the throne hence he should protest against the unfair decision.

According to one version, Shakuni had no specific reason to love for the Kauravas or any overflowing hate towards the Pandavas. He did not gain or lose by whosoever occupied the throne at Hastinapur and just wanted to make life miserable for both Pandavas and Kauravas for their forefather’s sin.

He didn’t care who won or lost the war. His evil aim was to set Hastinapur aflame. All he wanted to do was to inject poison in the minds of Pandavas and Kauravas and watch them fight each other. He wanted to take revenge for how his beloved sister Gandhari was married to a blind man and his father and 99 brothers lost killed thereafter. Hence this was one opportunity for Shakuni to settle his score. He didn’t wish to miss the god-sent chance.

Some of the indices of his evil bent of mind included:

DRAUPADI’S HUMILIATION: After winning the rigged game of dice Duryodhana ordered his brother Dusshasana to pull Draupadi by her hair and forcibly drag her inside the Kuru Durbar. As if this was not enough the Kauravas tried to disrobe Draupadi and humiliated her in a manner that shocked everyone present but no one dared to utter a word. At Duryodhana’s behest Dusshasana tried pulling Draupadi’s saree and humiliated her. This is when at Draupadi’s behest Lord Krishna kept increasing the length of her saree and protected her modesty in public. This was one of the main cause of the Kurukshetra war 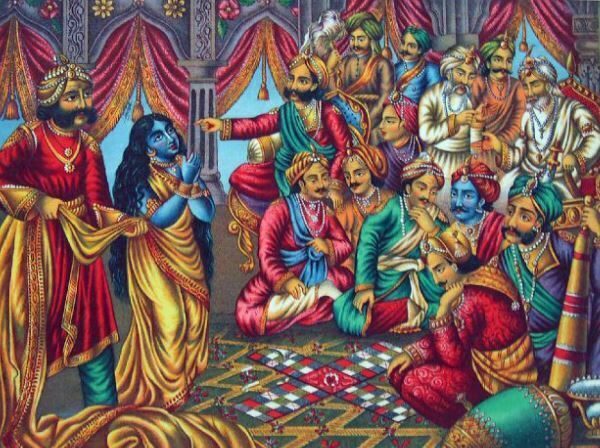 HASTINAPUR MEANS KAURVAS: All the elders namely – Bhisham Pitamah, Vidur, Guru Dronacharya, and Guru Kirpacharya personally disliked how the Kauravas behaved. But since each of them could prove to be a strong asset on the battlefield – Shakuni and Kauravas made them swallow the bitter pill and fight on behalf of the Kauravas.

LAKSHAGRIHA: Shakuni hatched a plan with Duryodhana to invite the Pandavas to stay in a beautiful palace called Varanavrata made of highly flammable lacquer or wax. The idea was to burn them alive but luckily Vidhur sensed something amiss and helped the Pandavas escape to a safe place 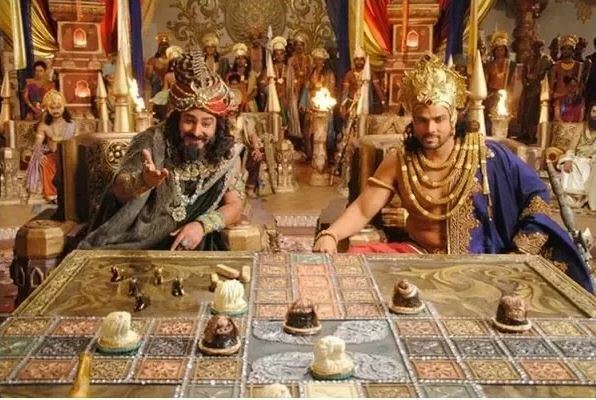 RIGGED GAME OF DICE: Everyone knew that Yudhishtra was not a good dice player but still could not say no to an invitation to play the game. So Shakuni conceived of a clever plan. He asked Duryodhana to invite the Pandavas to play a game of dice and not only replaced the dice but also offered to play on Duryodhana’s behalf. What followed was a string of defeats in which Yudhishthira lost his wealth, pearls, gold, chariots, elephants, horses, slaves, and army. Not only this he lost his kingdom, brothers and himself became a slave of Duryodhana. This when Shakuni invited Yudhishthira to bet on Draupadi and regain everything. Rest is history how Yudhishthira ended up losing Draupadi in the rigged game of dice

CHAKRAYUH AND ABHIMANYU’S KILLING: On the 13th day of the war Shakuni got Duryodhana to mislead Arjuna away from the main battlefield and used this moment to induce Guru Dronacharya to create the Chakravyuha formation which led to heavy damages to the Pandavas warriors who didn’t know how to break the formation as per the need of the hour. This is when Arjun’s 16 years old son Abhimanyu who only knew how to enter the formation but not to come out of it offered to lead Yudhishtra and others. This was the moment the Kauravas were waiting for as they cut off the exit. Trapped inside the chakravyuh Abhimanyu fought brilliantly against all the Kaurva stalwarts like Bhishma, Drona, Karna, Kripacharya, Shalya, Ashwathama, Shakuni and Duryodhana pounced on him when he was alone. This was one of the most immoral and unethical moments in the Mahabharata war. As per the mutually agreed guidelines before the war only two individual solders were allowed one to one. Abhimanyu gallantly fought till the end and breathed his last

KING SHALYA — Nakul and Sahdeva’s maternal uncle was known to be a bold and daring warrior highly rated by the allies and foes alike. He had made up mind to fight on behalf of the Pandavas when he started moving towards Kurukshetra. On the way he came across a lavish feast for himself and his huge army. Initially he thought that Yudhishthira had organized it for him but when he came to know that it was trick that Shakuni and Duryodhana planned; he asked them to take something from him in return but when they refused he offered his services as a non-combatant. Duryodhana initially asked him to be Karna’s charioteer and later appointed him Commander of the Kaurva Army after Karna’s death. Yudhishthira killed King Shalya and his army fighting on Duryodhana’s side began retreating in panic.

NARAYANI SENA Shakuni was one of the master-mind who provoked Duryodhana to make Lord Krishna agree to allow Krista Varma the Commander of the Lord Krishna’s Narayani Sena to fight on his behalf.

POISONING BHIMA’S FOOD– Shakuni planted the idea in Duryodhana’s mind to poison Bhima who was a voracious eater. So Duryodhana invited Bhima to eat sweets laced with a deadly poison. After eating the sweets Bhima fell unconscious. So Duryodhana threw him into the Ganga. Fortunately for Bhima, Vasuki, the King of Snakes saved him in the nick of time.

12-YEAR EXILE FOR THE PANDAVAS: Shakuni was one of those who plotted to send the Pandavas on a 12-year exile and one-year incognito period. This essentially gave time for the Kauravas to prepare themselves for the upcoming war 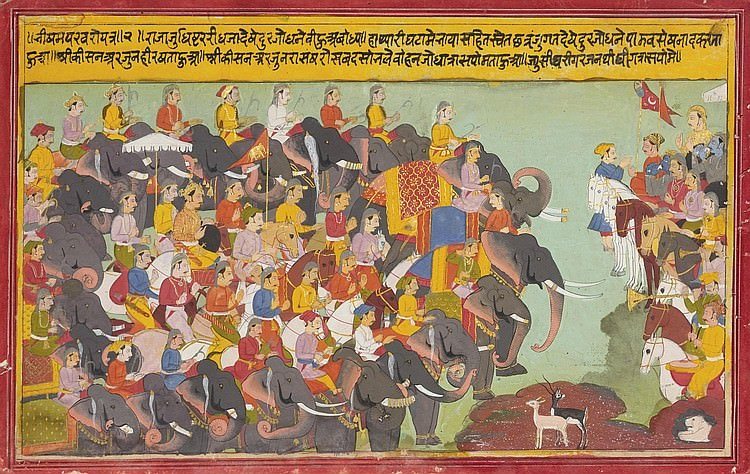 SUPPORT THE KAURAVAS: Shakuni influenced Vindan and Anuvindan to support the Kauravas to seek revenge against Sri Krishna who married their sister Mithravinda without their consent

FIGHT ON BEHALF OF KAURAVA: Shakuni  was a key conspirator who brainwashed Hiranya Varma – the father of Shikandi’s wife to fight on behalf of Kauravas because of his hostility towards Shikhandi

At the time of his death Shakuni’s father told him that even though he was not leaving behind a big kingdom; he was leaving behind a tool to win even bigger kingdoms. After cremation King Subala’s bones didn’t become ash. Shakuni picked them up and made dice out of them. According to some people Shakuni knew how to create an illusion that the opposite side had lost. Since that day Shakuni never lost a game of dice in his life thereafter.

As per the rules of the game of dice, the Pandavas proceeded on a 12-year Vanvaas (stay in the forest) and stayed incognito for one year thereafter.

Till the last day of the war, the Pandavas kept looking for an opportunity to kill Shakuni but he managed to slip away and avoid being slain each time. On the 18th day Bhishma was breathing his last on his bed of arrows; other warriors like Guru Drona, Karna, Dusshasana, and all the Kauravas except Duryodhana had been killed.

Out of sheer coincidence Sahadeva (one of the brightest and intelligent Pandava) and Shakuni somehow came face to face on the battlefield. Sahadeva who had an idea why Shakuni scripted the entire web of evil asked him to stop the meaningless violence and kill. So he asked Shakuni to stop fighting, as he had already achieved what he wanted to. As an icing on the cake, he even offered to allow Shakuni to go back to Gandhara. Shakuni was taken aback.

He felt deep regret and sincerely regretted what had transpired and started blurting the sequence of events since his childhood and confessed to all the crimes and evil deeds he had done.

What happened next was something — no one could have imagined. Full of remorse for what had happened Shakuni expressed a desire to honorably die on the battlefield and pay for his sins.

Once he finished saying this Shakuni picked up his bow and started shooting arrows towards Sahadeva – not to kill him but to spur him to kill an armed enemy.

Sahadeva cut off his head after a brief fight. This was the end of Shakuni.

It is said that selfishness is the greatest curse for the human race. So how can we get over this curse & save ourselves?
Read more
Education

The never-ending quest for learning

Our life is a series of experiences, each one of which makes us enlightened, even though many a time it is hard to realize this. We must always remember that the setbacks and grieves which we endure help us in our marching onward.
Read more
National

If we are want to finish off the Naxals, we also need to bring laws to punish politicians who cultivate the Naxals to silence their opponents
Read more
International News

Bangladesh assumes greater importance due to its strategic location to influence the Indo-pacific region. In view of the growing importance of this region, the expansion and modernisation of Mangla and Chattogram ports in Bangladesh will play a major role in future. It could also be included as a member of the extended ‘Quad’ in future.
Read more
COVID 19

Aged people often miss out on events and gatherings with their groups. You can make a personal support group for them to reach out to their friends and make new ones.
Read more
LIFESTYLE

Imagine, if every one of us raises to this higher consciousness, the world would be a nice place for women to live in. So, c’mon let's do it for the sake of our mother’s, sister’s, daughter’s and wives for they are the one’s whom we worship.
Read more
HEALTH

The elderly are in a state of constant hyper-vigilance knowing that they lie in the risk category. Constantly reading about these articles and with news on the TV, keeping up with the death toll and recovery numbers.
Read more
LIFESTYLE

Control population naturally or else nature will do so

For a country like India, population explosion is nothing but a curse that is retarding the true development of the country as well as of society. With 17.3% of the world’s population, India has become the second-most populous country in the world & shortly it's going to top the list for the very wrong reasons.
Read more