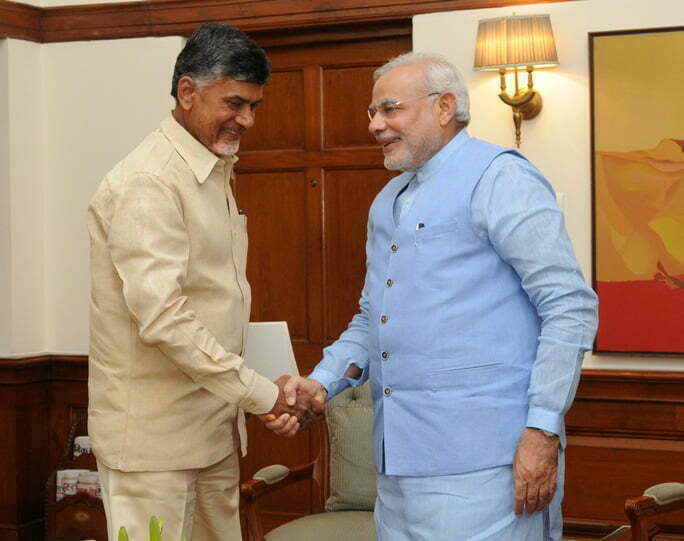 Upset over alleged phone-tapping and attempts by the Telangana government to book him in cash-for-vote scam, Andhra Pradesh Chief Minister N. Chandrababu Naidu Tuesday left for New Delhi to meet Prime Minister Narendra Modi to raise the issue and demand a probe.

He will also demand proper implementation of section 8 of Andhra Pradesh Reorganisation Act relating to the role of the governor in maintaining law and order in common capital Hyderabad.

This was announced by Andhra Pradesh Finance Minister Y. Ramakrishnudu on Tuesday after a meeting of state cabinet, which passed two resolutions on the two issues.

Ramakrishnudu said the cabinet took serious note of phone-tapping by the Telangana government and decided to take strong action as it is a violation of the law and the constitution.

At a five-hour long meeting, the cabinet discussed the situation in the wake of release of an audio tape of Naidu’s alleged telephonic conversation with Telangana’s nominated legislator Elvis Stephenson in the cash-for-vote scam.

The cabinet examined the possibility of registering a case as it felt Telangana government violated the constitution by tapping Naidu’ phone. The minister alleged that Telangana Rashtra Samithi (TR) government is trying to twist the cash-for-vote case. He also claimed that audio tape is fabricated.

“We have information that there are 120 tapes of telephonic conversation of chief minister, minister, officials and top leaders of Andhra Pradesh,” he said.

The minister said the central government would be urged to order a thorough inquiry into phone-tapping as the issue related to two state governments and one can’t interfere in jurisdiction of the other.

“They are clearly saying phone-tapping has been done. They are spreading rumours that a case will be booked. This is character assassination of the chief minister by Telangana government,” he said.

Ramakrishnudu demanded that the Telangana government clarify as to how it got the audio tape, who released it and which channel aired it. “Whether it is phone-tapping or phone recording, it is violation of the constitution,” he said and wondered why the same was not produced in the court.

The cabinet felt that there is a need for bringing amendments to Reorganisation Act as some provisions are favourable to Telangana and creating problems for Andhra Pradesh.

The state government also decided to make representation on both issues to Governor E.S.L. Narasimhan.

The cash-for-vote scam came to light on May 31 when Anti-Corruption Bureau (ACB) of Telangana arrested TDP’s deputy leader in the Telangana assembly A. Revanth Reddy while offering Rs.50 lakh to Stephenson to make him vote for the TDP-BJP candidate in Telangana legislative council elections.

The ACB also arrested Revanth Reddy’s two aides in a trap laid on a complaint by Stephenson. (IANS)

The US dollar is the worlds most trusted and preferred currency. It is hardly a surprise then that 66% of the worlds reserves are held in US dollars.
Read more
Politics

It is much more than a simple number game when it comes to deciding the PM of democratic India. Had it not been so Jawaharlal Nehru could not have overshadowed stalwarts like Sardar Patel, Subhash Chander Bose, Jayaprakash Narayan or Maulana Azad without much of support within the Indian National Congress
Read more
Editors Pick : Top Stories

This is Obama's third memoir -- even before the 44th US President had written two bestsellers ‘Dreams from My Father’ in 1995 and ‘The Audacity of Hope’ in 2006.
Read more
NEWS

If our nation has to develop the way Japan, Vietnam and Singapore have progressed in recent times we need to seriously re-think the way our elections are held and the type of representatives being elected to govern our country.
Read more
OPINION

Congress was a culture, a philosophy and a value system – not a party. What exists today is a deplorable, dull, drab and ruined organization.
Read more
BUSINESS

The Finance Ministers and their dream budgets