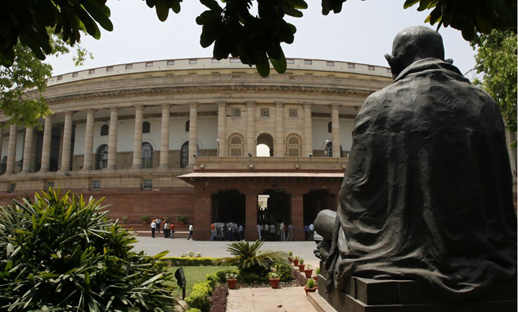 The recent arrest of Arnab Goswami, Editor in Chief of Republic Media Network in an old, closed and shut case of abetment to suicide in the year 2018 has sparked a public debate on the independence of our three vital pillars of democracy viz Legislature, Judiciary and the Executive. The additional one, being the media.

The legislature is supreme in the sense that it is constituted by people’s representatives directly elected by the public. It’s main function being to make laws keeping the public welfare in mind. Executive is the cabinet based on the principle of joint responsibility. This entity is the “Power Almighty” which decides the fate of the country. They decide if India goes to war, trade with other countries, foreign relations, amount of foreign direct investment and so on. It is generally formed by a party which represents maximum numbers in the legislature or the Parliament.

Judiciary ensures that the rule of law prevails. It even reviews the constitutional validity of an enacted law passed by the legislature and consented to by the President of India. Thus judiciary has a high sense of moral and ethical responsibility to discharge its functions.

The bureaucracy which is often called the wheels of governance has the onerous responsibility to discharge and implement the decisions of all these above named pillars of democracy. In their parlance it is termed as “Public Service”. Therefore, the bureaucracy has to discharge its functions with the utmost honesty, integrity and loyalty in the best interests of the Nation.

The above indeed is a very fine model of governance of a country which should deliver an unquestionable result and the public at large would be assured of impartiality, justice and equality at all times. In a democracy like ours, the media plays a very important role to influence public opinion as well as analyse the working of the Legislature, Executive and the Judiciary in its entirety. Unfortunately we have experienced the role of media to the contrary. There is hardly a TV news channel today that does not toe the line of the ruling party, whichever party may be in power. In return they get loads of advertisements, access to breaking news and exclusive interviews with the top hierarchy in Cabinet of Ministers. Who would want to let go of these freebies. Today courts are held in studios and judgement given. 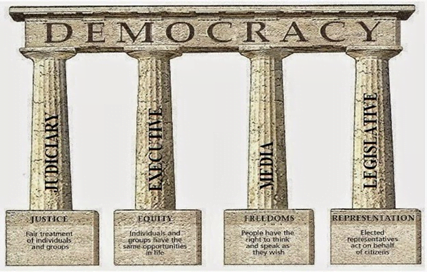 In the present environment, can we the citizens of our country safely assume that our legislature, executive and the judiciary have performed their roles in the most impeccable manner deserving all our trust and confidence?

Today, the Executive is known to play a major role in the functioning of important law enforcing agencies such as the CBI, Enforcement Directorate, Narcotics Control Bureau and so on. There have been numerous instances that these agencies have been used to settle personal political vendetta. The infamous CBI vs CBI case is well known. It is this very reason that the State Governments have started refusing permission to CBI to investigate cases within their states.

The Sushant Singh Rajput case amply brought out how these three pillars of our democracy which also included the media were manipulated to serve political ends. The arrest of Arnab Goswami was a manifestation of all these machinations which take place behind closed doors. It was openly evident how the Central and the State Governments were reacting to the situation, which unfortunately does not augur well for the democracy of the country. Today a journalist gets arrested for making a tweet. Unfortunately, belief in individual liberty, democracy and the rule of law cannot be selective.

The need of the hour is to galvanise our minds towards electoral reforms. In the just concluded Bihar State elections over 70 percent of the MLAs face criminal pending charges. Are these the people who are going to govern us and lead the nation towards economic prosperity? I feel they would be more concerned for their own prosperity.

The criminalisation of our political system has been observed almost unanimously by all recent committees on politics and electoral reform. Criminalisation of politics has many forms, but perhaps the most alarming among them is the significant number of elected representatives with criminal charges pending against them. It is widely believed that in many cases successfully contesting an election costs a significant amount of money that is often much greater than the prescribed limits.

A Consultation Paper to the National Commission to Review the Working of the Constitution noted that “the campaign expenditure by candidates is in the range of about twenty to thirty times the legal limits”. But the problem with extravagant spending of money is that the person who wins the election spends all his or her time recovering the money that he or she spent during the election and in returning favours to those who funded him or her, rather than focusing on real issues of governance. In addition to this the citizens are directly affected because apart from compromised governance, the huge money spent on elections pushes up the cost of everything in the country and in return the general citizen has to face the real hurdles. Moreover it has been seen that Electoral compulsions for funds become the foundation of the whole structure of corruption.

Therefore, if our nation has to develop the way Japan, Vietnam and Singapore have progressed in recent times we need to seriously re-think the way our elections are held and the type of representatives being elected to govern our country. The independence of the judiciary and the law enforcements agencies will never get undermined if our elected representatives constitute values of honesty, integrity and dedication within their being. The Prime Minister then need not ask everyone to undertake a pledge against corruption, if the country has the right kind of people at the helm of affairs. I am reminded of a famous quote, “Show me the heroes that the youth of your country look up to, and I will tell you the future of your country.”

In the meat and poultry food industry, animals such as sheep, goats, turkeys, chickens, ducks, and game birds etc, are considered halal, but they must be prepared according to Islamic laws in order for their meat to be suitable for consumption.
Read more
National

Cyclone, hurricane, typhoon or storm all mean the same depending on the part of the world you are. Indian seas are no strangers to cyclones
Read more
COVID 19

In what is the first of its kind initiative, the Indian army is training a dozen-odd Chippiparai, Labrador and Cocker Spaniel dogs to sniff...
Read more
HEALTH

Dr Reddy is the first-ever Indian medical practitioner to get this recognition for exemplary work in the field of endoscopy. The Rudolf V. Schindler Award is the highest category in the prestigious Crystal Awards named after Dr Schindler “the father of gastroscopy.”
Read more
DEFENCE

The inside story: Mashkoh– Kargil as I saw it # 15

When I was a youngster, I used to wonder if I would ever participate in a war. Only the lucky ones get this chance. In war, there are only winners or losers; there is no runner's up.
Read more
National

During the planning process and briefing, even the junior-most commander and soldier must be encouraged to ask questions and clarifications. If the troops are not clear about the plan, it will affect the execution of the same. Leaders must take the time to explain every detail so that everyone understands it. Keep the plan simple is the mantra!
Read more