Lord Ganesha — the beloved child of Lord Shiva and Goddess Parvati is one of the most loved Gods world-wide. As per folklore Goddess Lakshmi, the wife of Lord Vishnu adopted Ganesha as her own child, which is why the worship of one without the other is said to be incomplete. According to a popular legend in many parts of the world, Ganesha married to Lord Brahma’s daughters Buddhi (“Intelligence”), Riddhi (“Prosperity”) and Siddhi (“Success”) is believed to be the God of knowledge, intelligence, accomplishment and prosperity.

This is one of the reasons why people who migrated to other parts of the world carried a small idol of Lakshmi Ganesha to bring prosperity and remove obstacles. Not just Hindus, Jains and Buddhists all over the world are known to worship Ganesha in India, Nepal, Philippines, Java, Sri Lanka, Japan, Thailand, Bali (Indonesia), Trinidad and Tobago, Bangladesh, Fiji, and Mauritius. A number of Ganesha temples can be found in Switzerland Mexico, Cambodia, Britain, Canada, Australia, France, Germany, USA and even China.

According to some researchers, the Romans named January, the first month of the year after Janus or Ganesha the god of good beginnings.

Footprints of Lord Ganesha can be traced in different parts of the world over the past 2,500 years. For Tibetans know him as Ts’ogsbdag, Burmese worship him as Maha-Pienne. Mongolians as Totkharour Khagan, while Cambodians worship him as Prah Kenes.

True to his playful nature Ganesha changes his look and appearance depending on the country and its culture and is hence worshipped in one form or the other.

Lord Ganesha is popularly called Phra Phikanet or Phra Phikanesuan is one of the most worshipped deities in Bangkok and other parts of Thailand – predominantly a Buddhist country. There are a number of Ganesha shrines and statues throughout Thailand. These include the shrine of Lord Ganesha is in front of Central World Shopping Complex and the Royal Brahmin Temple in central Bangkok. There are a number of shrines where Ganesha is worshipped by the Hindus and Buddhists alike as the God of wisdom and remover of obstacles.  Some Thais refer to Ganesha as “Por Kru” (Father Guru).

King Vajiravudh of Chakri Dynasty who was himself a devotee of Ganesha built a Ganesha shrine at Sanam Chandra Palace in Nakhon Pathom Province. Even today there are many Thais who regard Ganesha mainly as the God of arts and academics. Ganesha is also depicted on the logo of the Department Fine Arts, and the Silpakorn University.

There are more than 250 standalone temples dedicated to Ganesha, known by names like ‘Kangiten’, ‘Shoten’, Ganabachi (Ganapathy) or Binayakaten across Japan.  Kangiten is considered to be endowed with great power and a God who bestows material fortunes, prosperity, success and health. People offer rice wine (sake), radishes and “bliss-buns” (kangi-dan) to please the god and recite mantras to appease the deity and drive away obstacles.

Peculiarly the younger generation in Japan worship Lord Ganesha as the God of love who brings success in courtships, while the old worship him for success in business. Many Japanese temples depict two elephant-headed idols on the entrance.

Lord Ganesha is a popular figure in Sri Lanka, where people call Him Pillaiyar (the Noble Child). Even though the majority of people in Sri Lanka today are Buddhists there are a number of Ganesha temples in Jaffna, Colombo, Alaveddy, Kandy, Batticaloa, and Kataragama. Lord Ganesh Temple in Kataragama is one such temple that attracts a number of devotees who break coconuts on a holy rock and ring bells.

Ganesha is in fact so well entrenched in the Sri Lankan culture that many famous Buddhist temples like the one in Kelaniya near Colombo have large Ganesha idols at the entrance. This is how many Sri Lankans worship Ganesha before entering even Buddhist holy shrines.

Lord Ganesha is a popular figure even in Indonesia an Islamic country with 17,000 islands and 300 volcanoes where majorities (89 %) of people follow Islam. In spite of this, there are over 4,600 Hindu temples located all around the country. The 20,000 Rupiah currency consists of a picture of Lord Ganesha.

Ganesha is worshipped as the god of education in Indonesia the largest Muslim country in the world, which also has the fourth largest Hindu population outside Indian subcontinent (next to Nepal and Bangladesh).

Ashok Binayak is a Hindu temple located in Kathmandu district. The presiding deity Lord Ganesha also known as Binayak is worshipped as the God of good luck by Hindus. The temple hosts one of the four original Ganesh shrines of Kathmandu valley that is worshipped both by the Hindus and Buddhists. The devotees visit the temple on every week Tuesdays – which is considered the day of Ganesha. The other three Ganesh shrines being Chandra Binayak, Surya Binayak and Jal Binayak. Apart from these Kamal Binayak and Karya Binayak are other popular Ganesh temples.

Lord Ganesha is traditionally known as Ts’ogsbdag or Lord of Beginnings and Remover of Obstacles. Before beginning anything new people pray to Ganesha.   Sculptures of Ganesha are often washed with water and adorned with flowers. Like most Hindu gods and goddesses Ganesha has multiple limbs, which indicate his supernatural power and cosmic nature.

There are a number of Ganesha temples in Sydney, Melbourne, Adelaide and other parts of Australia. These include the Sri Karphaga Vinayagar Temple in Sydney. It has a celestial tree which is believed to fulfill the wishes of devotees who worship there.  Apart from this the Sri Vakrathunda Vinayagar Temple, in Melbourne and Shri Ganesh temple in Adelaide are among the famous Hindu temples in Australia. 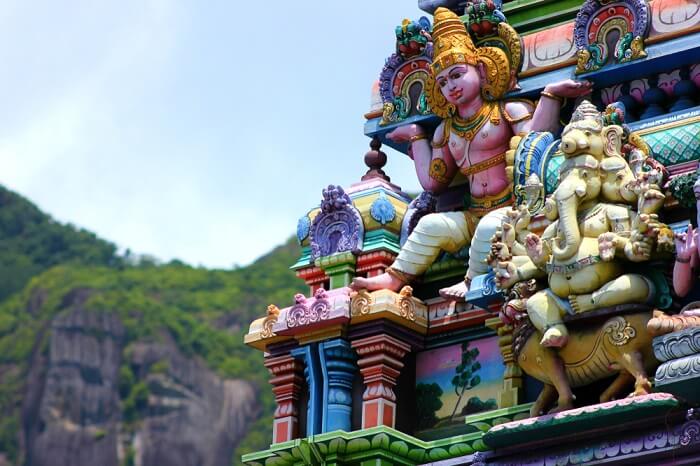 The Sri Maha Vallabha Ganapati Devasthanam, in New York City, claims to be the very first of the traditional Hindu temples in the USA. It is popularly referred to as the Ganesh Temple, Flushing since the main deity is Lord Ganesh. While there are now several Hindu temples in the New York City area, this temple continues to be among the most prominent of them. The temple architecture and the rituals follow the South Indian tradition. 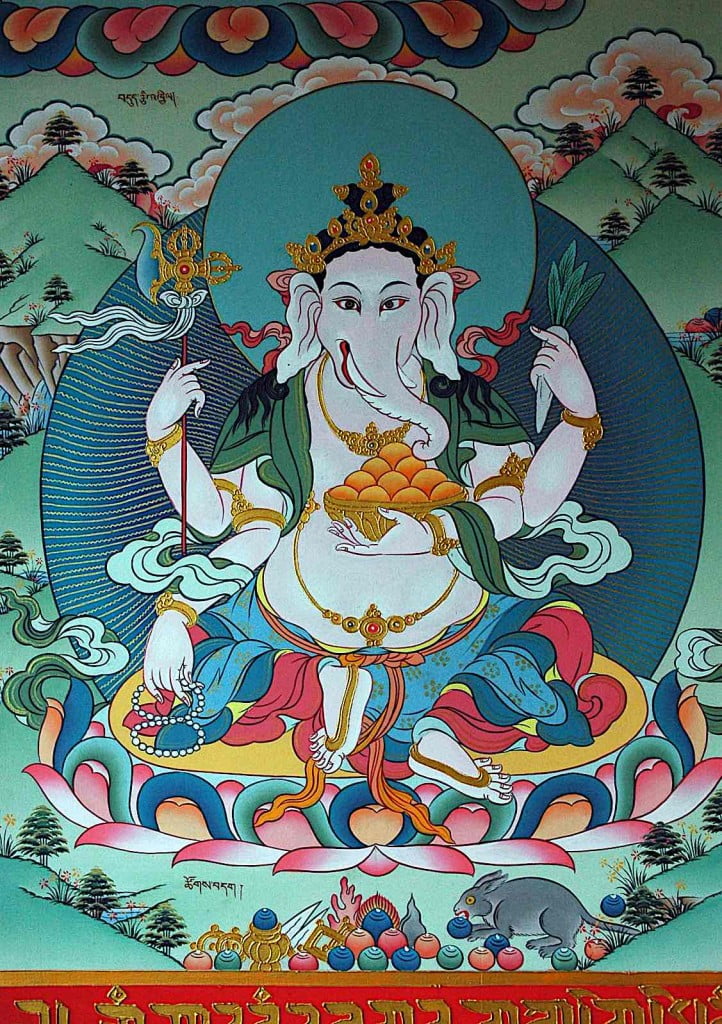 In many Buddhist temples, Ganesha is worshipped as Sho-ten or Shoden (literally, holy god) in the form of a massive dragon with incredible force. The Chinese believe that he is a God who could confer happiness upon his devotees. The idol of Ganapati in a Buddhistic monastery at Kung-Hsien in China carries the Chintamani (a precious gem) in the left hand. (The Chintamani is believed to be capable of granting any boon.) In seventh-century Buddhist China, he was seen as an obstacle creator who needed to be tamed with offerings.

The Sri Ganesha Hindu Temple has been under construction since 2010. There are approximately 100,000 Hindus living in Germany, 7,000 of them in Berlin. Europe’s biggest Hindu temple stands in London, while Germany’s largest is in the city of Hamm in the Ruhr region

In Mexico, Ganesha is known by the name Virakosha.

The turban is an inseparable part of the Sikh identity. The Sikh Rehat Maryada (Sikh Code of Conduct) says that all Sikhs must wear a Turban. It is an ideal headgear for all seasons. In the winter, it keeps the head and ears warm while protecting the wearer from harsh sun ray and dust in summer.
Read more
OPINION

The word ‘Tantra’ is derived from the combination of three words ‘Tattva’, ‘Mantra’ and ‘Yantra’. Tantra has infinite power with unlimited applications. Tantra is a legitimate science and not black magic. Vashikaran (A form of Hypnotism), voodooism and black magic are definitely neither part of Tantra nor has it been advised in any tantric scriptures.
Read more
NEWS

Strange though it may sound, there are temples right here in India where men are not even allowed to go inside and worship. What more there are some temples where even male priests are not allowed to enter for few days every month
Read more
Editors Pick : Top Stories

The Guru Granth Sahib comprising of 1430 pages and 5864 hymns is not just another holy book but an perpetual and eternal Guru for the sikhs. The sanctity of the Guru Granth Sahib is reflected in the manner in which it was treated by the Sikh Gurus. Today, no one can alter any of word, sentence or meaning of verses in Guru Granth Sahib.
Read more
Editors Pick : Top Stories

He didn’t care who won or lost the war. His evil aim was to set Hastinapur aflame. All he wanted to do was to inject poison in the minds of Pandavas and Kauravas and watch them fight each other. He wanted to take revenge for how his beloved sister Gandhari was married to a blind man
Read more
LIFESTYLE

God has been communicating with man using various modes through the Holy Spirit, angels, prophets, dreams, visions, and calamities etc, then finally He sent Jesus who said, “What I have heard from the father I tell the world.”No gadget is used, yet God’s messages are lucid if the concerned person is genial. He says, “My words that go out of my mouth will not return to me empty but will accomplish what I desire and achieve the purpose for which I sent it. The Christmas message sent to Mary is still relevant to them who believe in Christ.
Read more