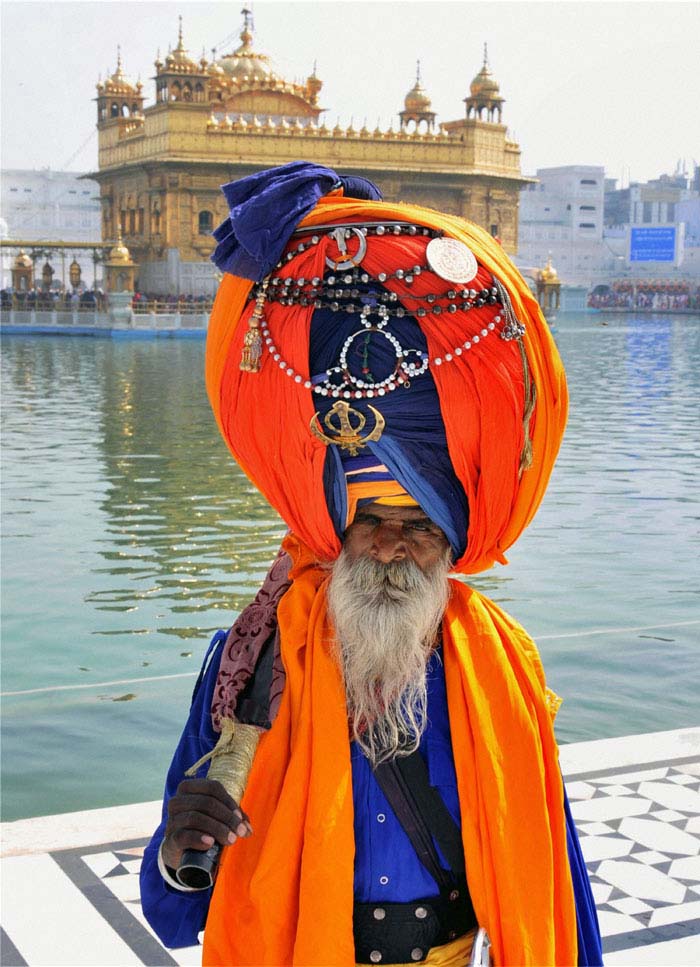 Turban, Pagṛi Or Pagg, is an inseparable part of a Sikh’s life. All Sikh Gurus wore Turban. Right from his childhood, Guru Nanak kept long hair and covered his head with a Turban. This practice was followed by his nine successors (1539 – 1708). This is cited in the “Guru Granth Sahib”, the Sacred Scripture of the Sikhs:

Guru Angad Dev placed a special Turban on Guru Amar Das’s head while declaring him as the next Guru. Even Guru Ram Das was offered a Turban by Guru Arjan Dev when he stepped into his shoes.

Prophet Mohammed in one of his hadiths states that the turban is a frontier between belief and unbelief. This aptly describes the significance of the turban for a Sikh as well. It is a true mark of sovereignty and a crown.

The turban is an inseparable part of the Sikh identity. And a manifestation of the Sikh mission – to oppose tyranny and protect the downtrodden.

The Sikh Rehat Maryada (Sikh Code of Conduct) says that all Sikhs must wear a Turban.

The turban and other articles of faith worn by the Sikhs have a spiritual significance.

The turban distinguishes a Sikh. It is a mark of the Guru and declares that the Sikh wearing a turban is a servant of the Divine Presence. Sikhs take this gift of the Guru with them everywhere they go.

Turban is an unstitched- five meters long and one meter wide cotton cloth. It is an ideal headgear for all seasons. In the winter, it keeps the head and ears warm while protecting the wearer from harsh sun ray and dust in summer.

In the traditional Indian society being bare head was considered inappropriate. There is an interesting anecdote where a man gone for a bath in the river; absent-mindedly returned bareheaded. On seeing him, come home bare-headed the women in the household mistook that someone had died and started crying.

For this simple reason, besides the Sikhs, people in many societies wear something or the other over their head. The main idea is to protect the head.

The Egyptians used to wear a turban that was only removed during mourning; this custom is still practiced in Punjab. In Christianity, Christ is believed to have commanded Moses to wear a turban as the symbol of prophethood, holiness, and divine power. That why all Jews, Muslims, and Christians cover their head.

Guru Gobind Singh personally tied dumalas on the head of his sons Ajit Singh and Jujhar Singh before sending them to the battle of Chamkaur Sahib where they died.

In Punjab- Pag Vatauni (exchange of turban) is a custom where men exchange turbans as a symbolic pledge to share their joys and sorrows together. Exchange of turbans is said to cement the relationship between two individuals and their families for generations. Even enemies become friends.

In North India, there is a ceremony called Rasam Pagri in which, a turban is tied on the head of his eldest son in front of a large gathering. It is symbolic of his assuming the family responsibilities. It signifies that from that day onwards he would shoulder the responsibility of his father, and he is the head of the family.

The turban is a symbol of a man’s pride and prestige. The highest disrespect and humiliation to someone would be to take away his turban or trample it. During the freedom movement, Sikh prisoners were forced to wear caps, which they refused.

There was a time when only kings, royalty, and those of high stature wore turbans. Two people would trade their turbans to show love or friendship towards each other.

The Turbans that the Sikhs wear each day represents a commitment to the founders of the Sikh faith.

The British officers were taken by surprise when the Sikh soldiers refused to wear steel helmets and faced the heavy barrage of bullets, shells and bombs wearing just the Turbans.

In the recent years, Sikhs have been subjected to unpleasant laws relating to the ‘Turban’ in some countries outside India. One such law is to wear a steel helmet while riding on motorcycles or when working in the construction or mining sectors.

Many countries Sikhs have finally accepted the fact that Turban is an integral part of the Sikh’s dress and their only headgear.

Similarly, the highest Court of the United Kingdom has ruled that Sikh drivers and conductors in public vehicles should not be compelled to wear caps.

Likewise in Canada Sikhs in Metro Toronto Police have been permitted to wear Turbans while on duty.

The word ‘Tantra’ is derived from the combination of three words ‘Tattva’, ‘Mantra’ and ‘Yantra’. Tantra has infinite power with unlimited applications. Tantra is a legitimate science and not black magic. Vashikaran (A form of Hypnotism), voodooism and black magic are definitely neither part of Tantra nor has it been advised in any tantric scriptures.
Read more
NEWS

Strange though it may sound, there are temples right here in India where men are not even allowed to go inside and worship. What more there are some temples where even male priests are not allowed to enter for few days every month
Read more
RELIGION

According to a popular legend in many parts of the world, Ganesha married to Lord Brahma’s daughters Buddhi (“Intelligence”), Riddhi (“Prosperity”) and Siddhi (“Success”) is believed to be the God of knowledge, intelligence, accomplishment and prosperity.
Read more
Editors Pick : Top Stories

The Guru Granth Sahib comprising of 1430 pages and 5864 hymns is not just another holy book but an perpetual and eternal Guru for the sikhs. The sanctity of the Guru Granth Sahib is reflected in the manner in which it was treated by the Sikh Gurus. Today, no one can alter any of word, sentence or meaning of verses in Guru Granth Sahib.
Read more
Editors Pick : Top Stories

He didn’t care who won or lost the war. His evil aim was to set Hastinapur aflame. All he wanted to do was to inject poison in the minds of Pandavas and Kauravas and watch them fight each other. He wanted to take revenge for how his beloved sister Gandhari was married to a blind man
Read more
LIFESTYLE

God has been communicating with man using various modes through the Holy Spirit, angels, prophets, dreams, visions, and calamities etc, then finally He sent Jesus who said, “What I have heard from the father I tell the world.”No gadget is used, yet God’s messages are lucid if the concerned person is genial. He says, “My words that go out of my mouth will not return to me empty but will accomplish what I desire and achieve the purpose for which I sent it. The Christmas message sent to Mary is still relevant to them who believe in Christ.
Read more