37 year old Shaesta Waiz is the first certified civilian with a commercial pilot rating from Afghanistan, and the youngest woman to fly solo around the world in a single-engine aircraft.

Born in an Afghan refugee camp, Waiz and her family migrated to the United States. She was six year old when her grandparents and father escaped to Pakistan on the way to USA during the Soviet-Afghan war in 1987.

She and five sisters grew up in an underprivileged school district in Richmond, California where substitute teachers, sharing textbooks with classmates, and watching friends drop out of high school was the norm.

Her parents and she herself believed that her future consisted of getting married at a young age and starting a big family. It wasn’t until she discovered the joy and fun behind flying in the sky and started thinking about it as a promising career to chase her dreams. 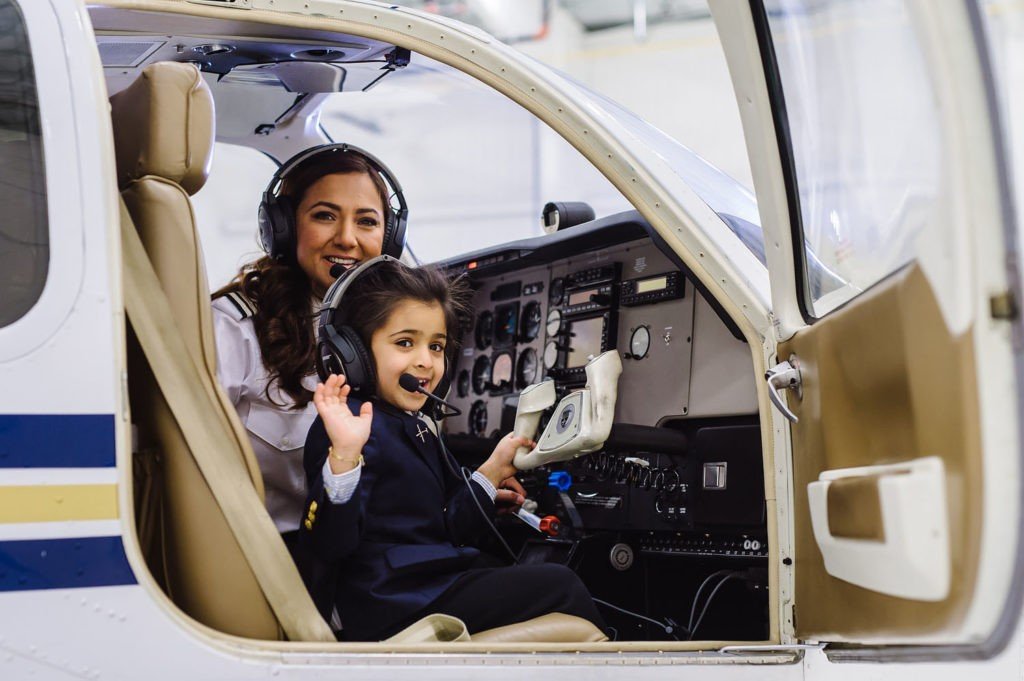 At the age of 18 she enrolled in the Embry-Riddle Aeronautical University to achieve her passion and fly in the sky.

Today she is the first person in her entire family to earn a bachelor’s and master’s degree — both from Embry-Riddle Aeronautical University.

While at Embry-Riddle, she started the Women’s Ambassador Program — an initiative to mentor and support young women pursuing an education in aviation and engineering, before taking up similar efforts at much larger and global scale.

She also founded Dreams Soar Inc. a non-profit organization, by sharing her story with women around the world and making them believe that it is possible to achieve your dreams, regardless of the challenges and traditions you may face..

The vision behind Dreams Soar is to partner with strong female role models along the route,  as well as share and promote the importance of STEM (Science, Technology, Engineering, and Mathematics) education.

Waiz became the youngest woman on a solo flight around-the-world in a Beechcraft Bonanza A36 single-engine aircraft.

On October 4, 2017, Waiz became the youngest woman to fly around the world solo in a single engined aircraft. Waiz’s historic solo flight departed on 13th May 2017 and returned 4th Oct 2017 at Daytona Beach at Florida, in United States. Her journey lasted around 145 days, over 30 stops in 22 countries and 24,816 nautical miles, across five continents.

The made it possible for her to host 32 outreach events inspiring over 3,000 young boys and girls to reach for the stars with STEM. Each stop was strategically selected based on the need for STEM outreach.

“Every time I open the door to an aircraft, I ask myself, “How did a girl with my background become so lucky?” she asks.

Women traditionally are underrepresented in STEM careers, despite high performance. According to the University of Michigan and University, Pittsburgh which tracked approximately 1,500 college- students over a decade– women had the highest scores in both math and the SAT test, compared to their male counterparts. In spite of this, most women opted for non-STEM careers after graduation.

Shaesta Waiz motive behind embarking on a solo flight across the world was to demonstrate that women can succeed in anything they wished to do. The Dreams Soar team considers it as a responsibility to inspire future generations and this historic flight represents the first chapter of many to come.

Shaesta Waiz was awarded the Smithsonian National Air and Space Museum 2018 under the Current Achievement category at a black-tie dinner in Washington, D.C for inspiring boys and girls to pursue STEM (science, technology, engineering, and math) and aviation careers.

“You must believe in yourself and allow your dreams to soar,” she says.

Online gaming transactions to be charged 28% GST in India?

Dubai has been witnessing an unparalleled demand for residential real estate from Indian investors. The reason is that Dubai is one of the global safe havens
Read more
BUSINESS

Top 12 economies in the world today

The economic health and wealth of a nation depend on a number of economic indicators which are statistics that provides valuable information about the economy.
Read more
CORPORATE DOSSIER

Our main objective is to help you choose some of the best dual shower head Australia you can buy online. Think out of the box! Be creative and make your bathroom the most elegant as possible.
Read more
DEFENCE

Bedsheets give a classy look to our house and reflect the taste of the user. Bedsheets are made from many fabrics but the best fabric for bedsheets is cotton.
Read more