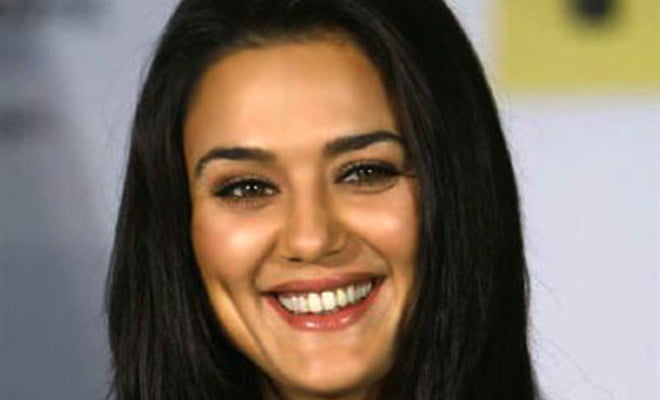 Actress Preity Zinta says the only actor who can make her cry during an emotional scene is superstar Shah Rukh Khan.

“The only actor who can make me cray at the drop of a hat in an emotion scene is @iamsrk omg! I have cried in so many scenes with him,” Preity, who has worked with SRK in movies like “Dil Se”, “Veer Zaara” and “Kal Ho Naa Ho” wrote on micro-blogging website Twitter.

The actress, who has completed 17 years of of her career in Bollywood, also wrote about her fellow co-stars in a question and answer session with fans on Twitter.

The bubbly actress revealed that she was “scared” of “Bajrangi Bhaijaan” actor Salman Khan before sharing screen space with him.

“The only actor I used to be scared of before I worked with him was @BeingSalmanKhan I don’t know why but I was,” she wrote.

The actress said that during the shooting of “Dil Chahta Hai”, her co-star Aamir Khan made a prank on her.

“@aamir_khan poured water in my mouth while I was sleeping with my mouth open in ‘Dil Chahta Hai’. In the bus I choked, socked him and then laughed,” she wrote.

“Of all my co-stars, my best co-star award goes to the one and only Rani Mukerji. She is a pleasure to work with and we had the greatest chemistry.”

The 40-year-old actress also shared a trivia from the film “Sangharsh”, where she said that she “chipped” her teeth and “broke” her leg in “the climax scene”.

“It was awful! I did beat him in the second take for revenge though,” she added.

Business is in her blood and her passion is to build companies and create products to empower women all over the world. Excerpts from an interview with Shalini Vadhera, Founder and CEO of Ready Set Jet
Read more
Education

‘Manekshaw and I were good friends’- Gen Jacob

Wars have their own logic. There is always one side that wins and another that loses the war. Everyone can’t win at the same time. Even in an individual context, no one can win all the wars; you may win some wars… but lose some others. Winning and losing is all part of life. This is the greatest lesson to be learnt from the life of Lt Gen (Retd) JFR Jacob. He won some but lost many battles in life.
Read more
HEALTH

Oil and Gas installations have never been safe – in the water, or above the ground. Every sector of the oil and gas fuel cycle is vulnerable to terrorist threats.
Read more
BUSINESS

Bank Frauds: Nothing is immoral or unethical

Banking today is not what it used to be. The relationship between the banker and the customer - even the reliability of commitments made by either of them- is at stake. The Confederation of All India Traders (CAIT) is the eyes, nose, and voice of around 6 crore merchants, 40000 affiliates and stakeholders in all formats of trade, association, group, sector or industry in the field of commerce and industry all over the Country. Headquartered at “Vyapar Bhawan” in New Delhi, its objective is two way communications and meaningful dialogue between the industry and Government to thrash out solutions acceptable to all the stake holders. Excerpts of an exclusive interview between CAIT National President B. C. Bhartia and Taazakhabar News:
Read more
Interviews

DTC buses: doing the best with half – the equipment, manpower and resources

Delhi Transport Corporation (DTC) – is today like an aged widow, past her prime. It does not have more than half the things required to run an efficient transport service. There are not enough buses. Even if floats tenders there aren’t many manufacturers who can make a delivery on demand. There is always a time-lapse as each of them does not have the capacity to manufacture more than 100 buses a month. To top it all there is an acute shortage of drivers and conductors
Read more
Interviews

Arya Samaj has a great future ahead

Arya Samaj –meaning; a society of nobles — is a non-political, spiritual and social organization campaigning in favour of women's education and widow remarriage while opposing caste discrimination. The main purpose behind the organization was to reform orthodox Hinduism in India.
Read more
Automobiles

Agility India P. Ltd. created a big splash in the Indian mobility market recently when it unveiled clean, eco-friendly, long-range Type IV Composite CNG Cylinders for the first time in India. These cylinders are not only 70% lighter than the Type - I steel cylinders currently being used in India but also provide more storage capacity on-board to cover approximately 800- 1000 KM per fill. The new technology will not only save costs but also revolutionize long distance travel and reduce the long queues at the CNG filling stations. Agility Fuel Solutions, Regional Director Ravindra Vashisht speaks his mind in an exclusive interview to Taazakhabar News
Read more