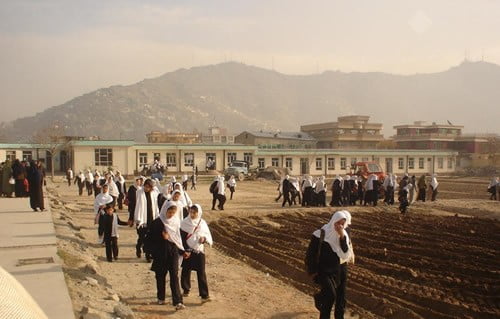 The attack on the army school in Peshawar- the worst terrorist attack in Pakistan’s history, which left 132 children and nine staff dead — is not an isolated incident. School children all over the world are living under the shadow of the gun.

The recent incident reminds us of the September 1, 2004, school attack in Beslan, North Ossetia, Russia where armed Chechen rebels took nearly 1,200 children and adults hostage. The siege continued for three days at the end of which 334 people including 186 children were killed, and 700 wounded.

All over the world some 125,000 terrorist attacks have been reported in the past nearly one decade. Over the past five years, armed groups, terrorists, and criminal groups have attacked thousands of school and university students, teachers and education establishments in some 70 countries. About 30 of these were deliberate attacks.

School in Afghanistan witnessed about 1,110 attacks – kidnappings, arson, explosions and suicide bombings. Attacks on schools have been part of an explicit Taliban policy. Grenades, IEDs, and rockets have been fired at schools. Tents have been burnt, and children have been killed on the way to or from school. The result is that more than 70% of schools in Helmand and more than 80% in Zabul – provinces have closed down. Even the rest have the world‘s lowest levels of attendance.

Colombia happens to be one of the most dangerous places for teachers. About 140 teachers have been killed, and 1,086 others have received death threats. Atleast 305 have been forced to leave their homes because their risk to lives over the last four years.

In Somalia, an Al Shabaab suicide bomber exploded a truck filled with drums of fuel outside a compound in Mogadishu housing the education ministry and other ministries, killing 100 or more people, many of whom were students and parents in October 2011.

In Somalia, it is fairly common for armed militants to use schools as bases while students and teachers were still inside. According to Human Rights Watch 2012 report “No place for children” in some cases the militant Islamist group Al-Shabaab locked frightened students and teachers in school, using them as human shields while they launched artillery attacks from behind the school or from school grounds. In one incident, a primary school student was in class when Al-Shabaab fighters started firing rockets from just behind the school. In the retaliatory firing, the school was hit by an explosive. Three children died, and six were injured in the attack.

The motive behind targeting schools, students, teachers and another staff is to:

Not just the terrorists, sometimes even security forces are responsible for militarizing the school. For instance in eastern and north-eastern India police and paramilitary forces reportedly used at least 129 schools barracks or their base in the conflict against the Maoist groups.

Worldwide security forces are known to use school and university barracks as bases to mount security operations or to house soldiers. Schools are also used as prisons, detention; interrogation or torture centers or for storage of weapons. In some places school buildings have been used to indoctrinate, recruit and train students. For instance, in Mali, young 11-year-old children were reportedly trained in private, public and Koranic schools by armed groups.

Using schools and universities for military purposes without first evacuating them tends to jeopardize the lives of students, teachers and other staff. The presence of armed forces personnel is an open invitation for the terrorists to open fire. In many cases, parents of children in such schools put to military use withdraw their wards, or the school remains closed. Even schools that were evacuated were subsequently damaged or destroyed in attacks.

At the other end of the spectrum terrorists and criminals in Colombia, DRC, Pakistan, Somalia, Thailand and Yemen are known to have recruited children for spying, transportation of arms or passing on messages to other students in schools, as well as running the drug business inside schools. In Pakistan, militants reportedly recruited and trained children from schools and madrassas as suicide bombers.

Students were abduction on the way to schools or rounded up students at schools. Terror groups threatened to kill students who refused to join them. Terrorist’s groups waited outside schools to talk to children; recruit and control them. In Yemen, Houthi rebels used students and teachers to recruit children. And in DRC, rebel groups abducted children en masse from school to fill up their lost cadres.

In Somalia, the Al-Shabaab abducted and trained 3,000 children for different tasks. In some cases abducted school girls were forced marry Al-Shabaab fighters. A 16-year-old girl who refused to marry a commander much older to her was beheaded, and her head was shown to other girls as a warning.

There were also isolated reports of sexual violence by armed forces or armed groups en route to or from schools.

Was China bluffing about Xi’s house arrest and coup against him?

China might have tried to fool the rest of the world by spreading fake use about Xi's house arrest. Deception is a key component of Chinese military strategy.
Read more
International News

How well educated is Prime Minister Modi and his cabinet?

There was a time when politics was considered the last resort for people who had nothing else to do. Not anymore…Today Prime Modi's cabinet today has ministers who are highly qualified people who quit their regular job, business, or profession to join politics.
Read more
DEFENCE

Autonomous weapons and the future wars

Autonomous weapons are armaments with a mind of their own - which once activated, can select and engage targets with or without any further intervention by a human operator.
Read more
International News

In the past few years, South Asia – the most populous and most densely populated geographical region in the world has witnessed a phenomenal rise in the production, trafficking, and consumption of synthetic or designer drugs, performance-enhancing steroids, and psychoactive bath salts (PABS) being prepared in clandestine laboratories.
Read more
DEFENCE

INS Vikrant is the largest warship ever built in India and also the first indigenously designed and built Aircraft Carrier for the Indian Navy. Its name is derived from the Sanskrit word vikrānta meaning "stepping beyond", "courageous" or "bold".
Read more
International News

The tallest buildings ever demolished in the world

The demolition of Supertech's Twin Towers in Noida said to be taller than Qutub Minar using 3,700 kg of explosives was nothing less than an engineering marvel.
Read more
International News

Merlin Entertainments, announced its re-entry into the Indian market, with the opening of Madame Tussauds wax museum at DLF Mall Noida. The wax museum will feature close to 50 figures from the field of history, sports, music, film, and television.
Read more
Education