Home CRIME How Nambi Narayanan was framed in a fake Spy Case?
CRIMENEWSNewsmakers

How Nambi Narayanan was framed in a fake Spy Case? 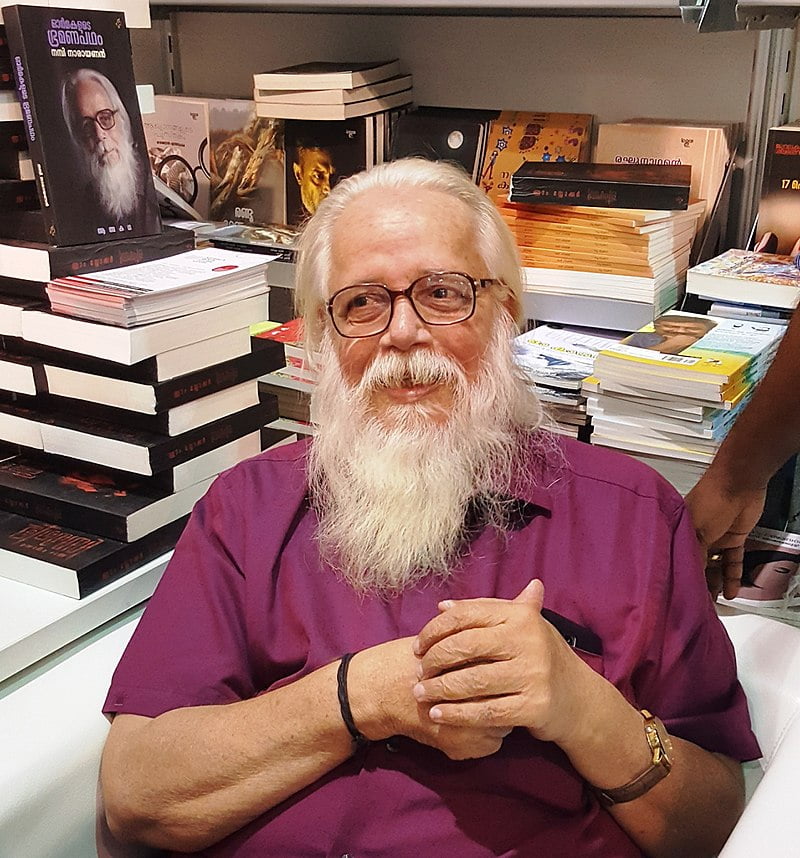 A three-judge bench of the Supreme Court headed by Chief Justice Dipak Misra has dropped all charges against Nambi Narayanan – a former Indian Space Research Organization (ISRO) scientist and directed the Kerala government to pay Rs. 50 lakh as compensation to him, for “wrongful imprisonment, malicious prosecution, humiliation and defamation”.

The idea behind this is to restore the reputation of Narayanan who hails from a middle-class Brahmin family from Tirunelveli in Tamil Nadu.

Expressing deep anguish at the manner in which 76-year-old Nambi Narayanan – was labelled as a spy, arrested and subjected to intense torture in the ‘ISRO spy scandal’, the Apex Court ordered setting up a panel headed by Justice DK Jain. The Committee headed by the former SC judge has been mandated to probe allegations against Intelligence Bureau (IB) and Kerala police officers including a former DGP, two (now retired) superintendents of police (SPs) and some inspectors for fabricating evidence and misguiding the investigation — leading to the scientist’s illegal arrest.

“The liberty and dignity of the appellant, which are basic to his human rights, were jeopardized as he was taken into custody and, eventually, despite all the glory of the past, he was compelled to face cynical abhorrence,” a three-judge bench led by CJI Dipak Misra said.

“Dignity of an individual is an in-segregatable facet of his right to life with dignity,” the CJI said.

Nambi Narayanan – the scientist-in-charge of the cryogenics division, another top ISRO official D Sasikumaran, two Maldivian women and a businessman were arrested 24 years ago and subjected to 3rd-degree torture by Kerala police officers to make them ‘confess’ in a fake espionage case.

The Intelligence Bureau (IB) and Kerala police officials interrogated him allegedly wanted him to make false accusations against the top brass of ISRO and in particular implicate A. E. Muthunayagam, his boss and the Director of the Liquid Propulsion System Centre (LPSC). When he refused, he was tortured until he collapsed and needed to be hospitalized.

To give a spicy and colorful twist to the case, stories were planted in the media, alleging that Narayanan and Sasikumaran were honey-trapped in a sex racket and selling ISRO secrets like the highly confidential “flight test data” pertaining to rocket and satellite launches in lieu of large sums of money to two Maldivian intelligence officers, Mariam Rasheeda and Fauzia Hassan.

While such acts of officers selling official secrets to their lady loves are not unusual, there was nothing on ground to suggest that Narayanan and Sasikumaran were also profiting from such crimes. Search parties who examined their homes found nothing extraordinary to suggest signs of living beyond the means or known sources of income.

The CBI which took over investigation found that the charges against Narayanan to be baseless and politically motivated. The Agency hence sought the chief judicial magistrate’s permission to close the ‘false’ espionage case as there was no evidence to back the charges. This was in 1996. The CBI report also listed lapses in the investigation and recommended action against the guilty police officers. As a result, the Court discharged all the accused and declared them not guilty in 1998.

But Narayanan had to spend the rest of his life recover his lost honour and prestige, even after the CBI and the Supreme Court dismissed all charges against him. That too, when top Intelligence Bureau officials like Additional Director R.B. Sreekumar, Joint Director Matthew John as well as Deputy Director D.B. Sreekumar and Kerala police officers like Siby Mathew, KK Joshua and S Vijayan responsible for fabricating evidence, misguiding investigation and giving a creepy twist to the case, continued to receive pats on their back and promotions at the behest of their political god-fathers.

Sreekumar, 1971 batch Gujarat cadre Indian Police Service (IPS) officer from Trivandrum, Kerala was Additional Director, IB when Nambi Narayanan was arrested. He went on to retire as additional director general of Gujarat Police in 2007. Sreekumar along with BJP leaders Rajnath Singh and Meenakshi Lekhi have filed defamation cases against Nambi Narayanan, for trying to malign him.

Likewise, Siby Mathews another top officer involved in the case is these days Chief Information Commissioner in Kerala.

A blue-eyed boy of ISRO chairman Satish Dhawan and his successor U.R. Rao, and a pioneer in the field of liquid fuel rocket technology, Narayanan has been a contemporary of Dr A. P. J. Abdul Kalam. A top scientist who realized the need for liquid propellant motors, Narayanan was developing indigenous fuel engines for ISRO’s future space endeavours. Meanwhile, India signed an agreement with Russia to transfer the technology and develop cryogenic-based fuels. This infuriated President George H. W. Bush so much that he threatened to blacklist Russia from the select-five club. Boris Yeltsin succumbed to the pressure and allegedly backed out from the deal to sell cryogenic technology to India in 1992. ISRO meanwhile tied up with Kerala Hitech Industries Limited (Keltch) to develop cheap cryogenic engines. But this could not materialize as the spy scandal surfaced in 1994 and Nambi Narayanan scientific genius who could have made things happen spent the best part of his life behind the four walls of a jail instead of a laboratory. Was this part of an international conspiracy, insensitive journalism or police brutality?

Significantly the chronology of events in the case which has come to be entanglement with Kerala politics shows that there is something more than what meets the eye.

The case which topped the charts in 1994 came to a virtual stand-still when the Karunakaran government was elbowed out of office in 1995. The CPI (M) government that came to power ordered a fresh investigation. The charges against him were dismissed by the CBI in 1996 and the Supreme Court declared him not guilty in 1998.

The National Human Rights Commission (NHRC) passed strictures against the Kerala government in September 1999 for the physical and mental torture as well as damaging the career of an eminent space scientist and his family. This was corroborated by the findings of a CBI report in 2000 when there was a BJP government at the centre and Atal Bihari Vajpayee was the Prime Minister of India.

The National Human Rights Commission (NHRC) ordered the Kerala Government to pay a compensation of Rs 10 lakhs to him before he retired in 2001 but instead of complying with NHRC and Kerala High Court orders, the state government has been stalling all efforts to restore Kerala Government still not complied Kerala High Court order to Nambi Narayanan’s reputation and allow him to spent time, in peace with his family.

Another indicator of a conspiracy to discredit and damage the two scientists even after the Supreme Court and High Court dismissed the espionage charges against them, both Sasikumar and Narayanan were transferred out of Thiruvananthapuram and made to spend the remaining days before their retirement in desk jobs

To add insult to the injury, the Kerala governments is making all efforts to protect the rogue police officers and dragging its feet over the compensation amount ordered by the Supreme Court, High Court and National Human Rights Commission.

Can the amount of compensation do justice to Narayanan and the other accused in the case? A question uppermost in the minds of every Indian is –Why, was he and the others made to undergo such an ordeal?

Narayanan, only regret is that ISRO – the organization, which he served with loyalty and dedication and its chairman Krishnaswamy Kasturirangan did not stand by him when he needed them most?

Nambi Narayanan had approached the Supreme Court against a Kerala High Court’s judgement, which said no action was required against the former DGP and two retired superintendents of police associated with the investigation of the case and responsible for the scientist’s illegal arrest by the CBI.

“I don’t want to be caught in the rat race to only make money. I would like to do something bigger”- Piyush Shrivastava

At 17 Piyush Shrivastava a teenager from Motihari, in Bihar has boldly faced many challenges and learnt not to give up and turn defeat into victory.
Read more
National

Inside Pakistan – politicians who lived in exile

The booming business of fake medicines in India

Why smuggling of Green peas is a serious ‘matar’ in India?

Smuggling and illegal cross border movement of green peas is a ‘serious matar’ and an organised crime that cannot be taken lightly. Over the past few years, several cases have come to light where huge quantities of green or dried peas have been wrongfully declared as something else or undervalued to avoid paying customs duties.
Read more
CRIME

It should not require the Supreme Court to tell the police that it is their primary responsibility to prevent the commission of crimes; to ensure that law and order and public order are maintained; and that mobs do not become lawless. The Rule of Law has to be upheld at any cost.
Read more
CRIME

When it comes to finding ingenious ways to harass people, the ingenuity of the cops knows no bounds. One of the most popular ways of harassing people is to oppose bail. Another common tool is to summon people unnecessarily to the police station to harass them
Read more
CRIME

The standard modus operandi of the police is to claim that the cash and weapons etc were recovered from the accused when they were arrested. Most of the time, such items happen to be ‘planted’ by the police. Invariably there are no independent witnesses or stock witnesses cooked-up by the police
Read more
CORPORATE DOSSIER

Sportswear giant, ADIDAS has roped in Indian Men’s Football team Vice-Captain Sandesh Jhingan to inspire and motivate Indian youth to take up the game. Sandesh was awarded the prestigious Arjuna Awards in 2020 for his outstanding achievement in football.
Read more