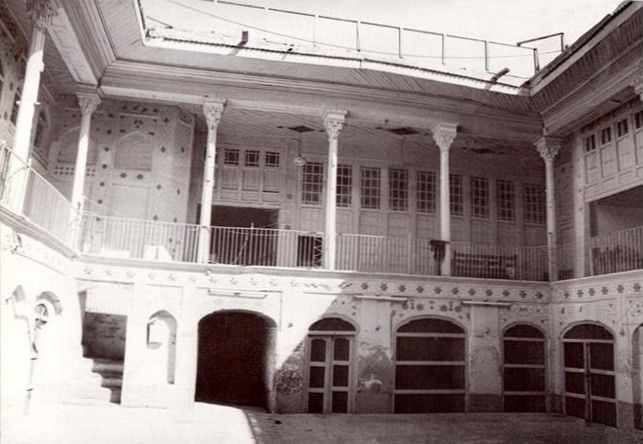 In course of his exile in Baghdad Bahá’u’lláh stayed in a house called the “Most Great House”.

Also known as the “House of God” or Bayt-i-A’zam — the most great house in the Kadhimiya district of Baghdad on the western bank of river Tigris was the place where Bahá’u’lláh lived from 1853 to 1863.

It was in Baghdad that Bahá’u’lláh penned some of his most renowned works like the “Hidden Words,” “Seven Valleys,” and the “Book of Certitude” (Kitab-i-Iqan). The theme of Seven Valleys was journey of the soul from this world to the realms of God.

The house is mentioned in the Kitáb-i-Aqdas as a place of pilgrimage. Bahá’u’lláh envisioned it as a site of obligatory Bahá’í pilgrimage.

One night Bahá’u’lláh was staying in the Baghdad house a large group of  Shi’ih Kurds surrounded the house with the intent to cause mischief at the instance of his opponents. They were about to unsheathe their swords when Bahá’u’lláh asked one of them: ‘In your estimation, where those who surrounded the Prince of Martyrs (The Imam Husayn) in the desert of Karbila, intending to slay him and his followers, believers in God and in His Messenger?’ ‘It is evident’, came the reply, ‘that they were unbelievers, for had they been Muslims and believers in God and the Prophet, they would not have put to death the kindred of the Prophet and His followers, and would not have led into captivity the family of the Prophet of God.’

At this moment Bahá’u’lláh invited them inside the house and after refreshments were served offered to explain the story of Imam Husayn and his martyrdom. He recalled how the 4000 strong army was sent to slay Imam Husayn a lesson and the change of the heart of its cavalry commander Hurr who crossed over to Husayn’s side.

Deeply moved, the Kurds arose from their seats and kissed the robe of Bahá’u’lláh. “We can be likened to Hurr, who at first was intent upon killing the Prince of Martyrs, but repented and became the first to yield up his life in his path’, they said before taking Bahá’u’lláh’s permission to leave.

Before leaving Baghdad, Baha’u’llah foretold that the house would one day be ‘abased’ by enemies of the faith and the ‘veil of sanctity’ would be ‘rent asunder’ by them in such manner as to ’cause tears to flow from every discerning eye’. This came true as Shiih Muslims expelled the Baha’i owners to occupy the building, defying court orders declaring the seizure as illegal. The Baha’is remained barred from the sacred and historic site for more than seventy years. No Bahá’ was not allowed to go near the place.

Unfortunately the House of Baha’u’llah in Baghdad was destroyed in 2013.

Goddess Durga – is an example of a perfect woman with many talents & powers which helped her triumph over evil. She is second to none and has unlimited skills
Read more
National

Why is Durga Puja a popular festival?

Some of the powerful weapons used in Mahabharat could crush the enemy. For Instance, Barbarik could single-handedly end the war in less than one minute.
Read more
RELIGION

The Bahai faith was founded by Bahá’u’lláh over 150 years ago. Bahai houses of worship or temples, are also called Mashriqu’l-Adhkar in Arabic meaning “The Dawning Place of the Mention of God.” People from all religions are welcome to meditate without any formal sermons and rituals.
Read more
RELIGION

Guru Tegh Bahadur was the youngest son of Guru Hargobind the sixth Sikh guru and ninth of ten Sikh Gurus. He started the concept of langars – to feed the hungry
Read more
OPINION

Lord Hanuman is one of the central characters of the epic Ramayana. Without him, any narration of the sequence of events that led to the death of Ravana or Lord Rama’s Ashwamedha Yagya after his return to Ayodhya is not possible. There are many lesser-known facts as to – what was the relationship between Lord Rama and Lord Hanuman or how did they meet in the first place?
Read more
Editors Pick : Top Stories

Millions of Hindus recite the Hanuman Chalisa every day. But how many of them know the significance behind the five heads of Panchamukhi Hanuman? Even apart from this, there are many things about Lord Hanuman which remain a mystery. For instance, how many people know about sage Durvasa's curse which led to his birth as a vanara or that he had a son called Makardhwaja. Here are some such lesser-known facts about Lord Hanuman:
Read more
OPINION

Lord Hanuman is believed to be an ideal combination of Shakti and Bhakti. But still, there are several lesser-known facts related to Lord Hanuman.
Read more