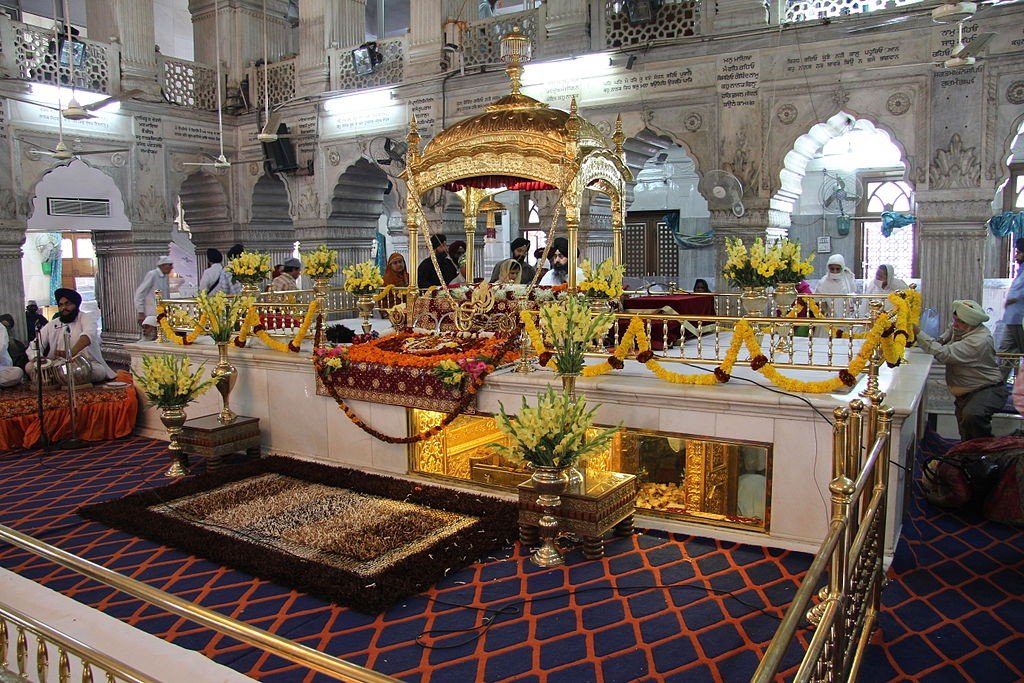 The authority and sanctity of the Guru Granth Sahib as a sacrosanct spiritual guide is reflected in the manner in which it was treated with respect by the Sikh Gurus themselves.

Guru Arjan Dev– the first Guru to be born into a Sikh family– is credited to have installed the first edition of the Sikh scripture at Harimandir Sahib or Golden Temple in Amritsar.

According to Sikh legend, Guru Arjun asked his followers where they wanted the first edition of the Adi Granth or Guru Granth Sahib to be installed. “You are omniscient, Master! But there is no place more suitable than the Harimandir,” Bhai Buddha replied. Guru Arjan Dev agreed and said, “There is nothing like it in all the three worlds. Harimandir is like the ship—the means for the people to cross over the worldly ocean triumphantly. A new joy pervades here every day. A sight of it annuls all sins.”

The night before embarking on the journey to place the first edition of the Adi Granth in the Golden Temple at Amritsar, the Granth Sahib was made to rest and placed on a soft seat under a canopy, while Guru Arjan Dev and the Sikh Sangat slept on the ground.

At daybreak, Bhai Buddha carried the Holy Book on his head. Guru Arjun walked behind him swinging the whisk. So did the musicians singing shabads. As soon as the Sangat reached Harimandir Sahib, the Granth Sahib was ceremonially installed in the center of the inner sanctuary. Bhai Buddha opened it at random to read the divine hukumnama while Guru Arjun stood behind in attendance.

As decreed by Guru Arjun Dev, the Holy Book should remain in Harimandir Sahib during the day. At night after reading the Sohila, the Granth Sahib, should be wrapped in silk and taken to a room he had built for himself. That night, once again Bhai Buddha carried the Granth Sahib on his head as he marched towards the chamber indicated by Guru Arjun, who followed behind. Inside, the Guru’s chamber, Granth Sahib was placed on a high pedestal, while Guru Arjun, slept on the ground by its side.

In due course, this became a daily routine in which the Holy Book was respectfully placed inside the Harimandir in the small hours of the morning and escorted back in the night to its restroom earmarked by Guru Arjun. This practice is followed even today.

History has it that some people conspired to poison the mind of Mughal emperor Jahangir by spreading rumors that Guru Granth Sahib was primarily being written in an alien language to preach hatred against the Muslims. An enraged Jahangir imposed a fine of 200,000 rupees and ordered Guru Arjan Dev– the fifth Sikh Guru to delete some of the hymns in the Guru Granth Sahib manuscript. Guru Arjan Dev preferred a martyr’s death instead of expunging the offensive text and paying the fine. This led to his execution on the orders of Emperor Jahangir. He became the first of the two Gurus martyred in the Sikh faith.

Shah Jahan’s son Aurangzeb summoned Guru Hargobind’s son and the seventh Guru, Har Rai to clarify the meaning of a few verses in the Gurbani and also explain why the Sikhs supported his brother Dara Shikoh in the succession war in 1658. Guru Har Rai sent his elder son Ram Rai to explain his stand to Emperor Aurangzeb.

Aurangzeb found a hymn penned down by Guru Nanak Dev in the Adi Granth to be objectionable from the Muslim point of view and ordered Ram Rai to be kept as hostage. Instead of standing by the Sikh scripture, Ram Rai attempted to alter and change the wording of a hymn to appease Emperor Aurangzeb. When Guru Har Rai came to know this, he disowned or excommunicating his elder son Ram Rai and forbade the Sikhs to associate with him or his descendants. Going a step further, he decreed his five-year-old youngest son Har Krishan to succeed him as the eighth Guru after his death in 1661.

Guru Tegh Bahadur the ninth Sikh Guru was arrested and beheaded in 1675 because he objected to Aurangzeb’s forced conversions. He was the last of the two Sikh Gurus to be martyred for trying to preserve the religious sanctity.

Guru Gobind Singh — the tenth Sikh Guru, conferred the status of “Guru of the Sikhs” on the Guru Granth Sahib in 1708 and nominated it as the next guru after him. He said, “Sab Sikhan ko hukam hai Guru Manyo Granth” meaning that all Sikhs should regard the Granth as their Guru.

Even today, Guru Granth Sahib remains a living Guru and perpetual guide for the Sikhs all over the world. It is always placed on a dominant platform in a home or Gurudwara and covered by a decorated canopy.

Both Sikhs and non-Sikhs bow or prostrate before it. Anyone entering the premises to seek the Granth Sahib’s divine blessings has to wear a pugree or cover the hair on his/ her head with a handkerchief or rumala.

In Gurdwara, the holy Granth is made to sleep on a bed at night — wrapped in an expensive cloth or blanket, under a canopy in a separate room called a “Sachkhand”. This is symbolic of a ceremonial closure of the Guru’s court at the end of the day. At this time the Guru Granth Sahib is made to retire on a special bed (manja or palang) — normally housed in a different room near the Darbar Hall.

In an individual home, Guru Granth is wrapped and placed on a small cot, beneath a canopy in a Pooja room.

Every Sikh is expected to learn Gurmukhi to be able to read, recite, or listen to Nitnem Banis or the daily prayers for the practitioners of Sikhism. These include the five daily prayers known as Panj Bani or the Amrit Banis.

The prayers in the Sikhs culture include—naam simran or meditation of the divine being early morning during amritvela, Paath or daily reading of Guru Granth Sahib, nitnem banis or set of five daily prayers, mala or reciting mantras using a rosary bead, kirtan — devotional song and ardas or a petition before the Almighty in the form of prayer.

Protocol to be followed by anyone attending to the Guru Granth Sahib:

The Guru Granth Sahib is never left unattended. The Guru Granth should never be carelessly placed here and there on any unclean surface or on the ground. No one should sit on a platform higher than the Guru. At night, the Guru should be placed on a bed or cot with a canopy on top – as a mark of respect befitting the Guru’s status. All Gurbani Text no longer required is to be destroyed.

The Sikh code of conduct prohibits transporting the Granth Sahib to any place which is not used strictly for worship or used for parties, smoking, dancing and serving meat or alcohol. 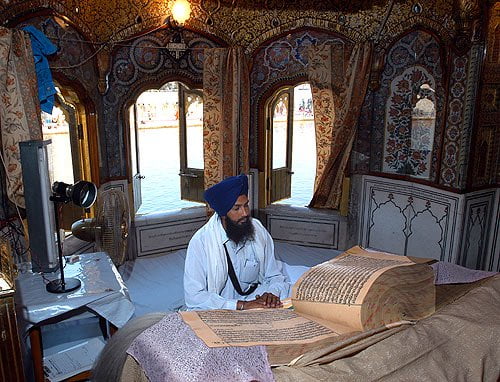 The Guru Granth Sahib or Maharaj should always be placed in a ventilated room but never in a cupboard. The Granth Sahib must be placed on a Manji Sahib — at least 12 inches high, 36 inches wide and 18 inches deep. A plain white sheet is to be placed on the Manji Sahib. The Guru’s bed should have a canopy placed over it. Appropriate clothing as per the season should be placed upon the Guru’s throne. A fan or air condition should be provided if the temperature requires. No alcohol, meat or drugs are to be consumed in a building which houses the Guru Granth Sahib.

The attendant or persons in the Sewa of Guru Granth Sahib must cover their head at all times by a turban/patka or chunni and should not wear any shoes, sandals, socks or gloves.  Before touching the Guru Granth, the attendant must have a bath, wash their hair and wear clean clothes.

A person in the Service or Sewa of Guru Granth Sahib must observe the following:

While on the move, the following decorum is observed:

Every day the Guru Granth needs to be escorted from the sukhasan area to the place where the Prakash or the ceremonial opening of the wrappings covering the Granth takes place. This is like a military drill with a specific role for each volunteer.

On commemorative occasions and festivals, the Sikh devotees carry the Guru Granth Sahib on their shoulders or in a float which is paraded through streets sprinkled with flowers. An attendant accompanies the Granth Sahib at all times.

Like a caring mother nature gives us the food that nourishes and sustains our bodies as also water that cleanses and gives us life. It also provides fresh air to supply us with oxygen, which is vital to keep bodily functions going.
Read more
Editors Pick : Top Stories

The National Education Policy 2020 envisions an India-centric education system that contributes directly to transforming the nation sustainably into an equitable and vibrant knowledge society by providing high-quality education to all.
Read more
DEFENCE

If death is the be all and end all and it can kill anyone, anytime, then why should we bother about doing good deeds and fear punishment for our sins?
Read more

It is much more than a simple number game when it comes to deciding the PM of democratic India. Had it not been so Jawaharlal Nehru could not have overshadowed stalwarts like Sardar Patel, Subhash Chander Bose, Jayaprakash Narayan or Maulana Azad without much of support within the Indian National Congress
Read more