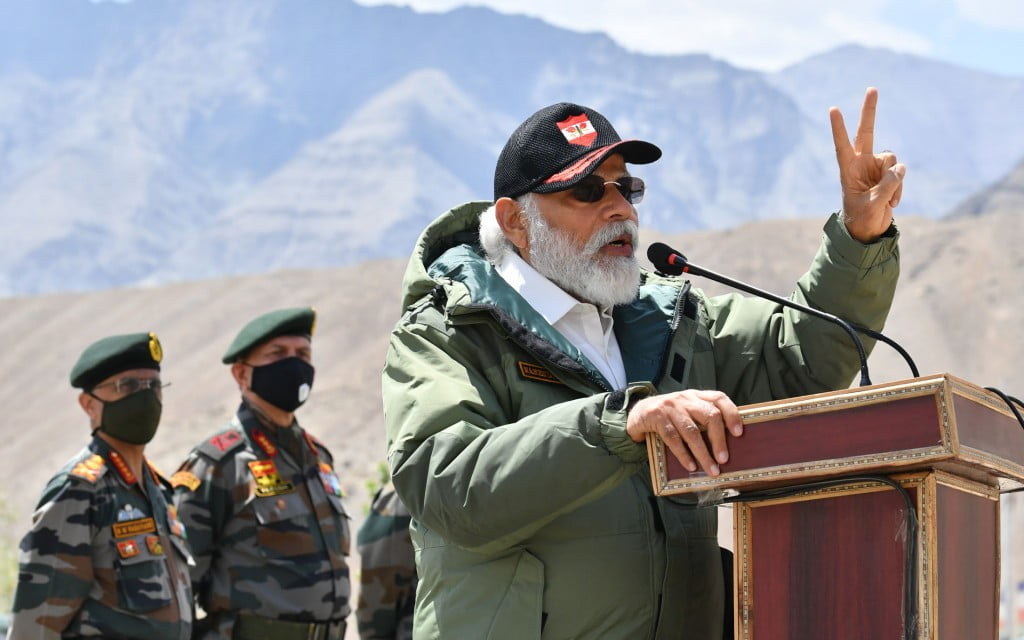 PM Narendra Modi’s surprise visit to formation HQs in Ladakh, engaged in the ongoing face-off with the PLA coupled with his commendable oration and ability to connect has proved to be good morale booster troops.  Like all his visits, the surprise was inherent, to heighten the messaging. Without naming China, enough was stated to communicate resolve and refusal to bow to bullying. Having given China a reasonable six-week window to de-escalate there is a marked shift in strategy. Significantly, PM highlighted power, as an instrument to usher peace, signalling long term commitment to capability building and infrastructure development. It is well-crafted counter to Chinese diabolic psychological maneuvers, pretending to even ignore this issue.  China has been jolted to react, advising India to exercise restraint. It will be more appropriate for Dragon to re-calibrate, its creeping expansionist strategy. Thirdly, interaction with troops recharged the Galwan spirit, which has etched an unforgettable lesson for the PLA. Also, it may trigger some rumblings in China, on a wide disparity in honouring soldiers, killed in action.

While the visit has generated many positives, yet it has to be followed up with sustained concrete measures, as Chinese are unlikely to heed easily. Our options are limited and we have to be prepared for the protracted long haul. The main problem is that delay enables PLA to consolidate and makes it more difficult to evict them. Clearance like Kargil has severe penalties and is near impossible. A recent study by Dan Altman has catalogued 59 land grabs in various global conflicts and overwhelming 47 incursions, aggressors have managed to hold on to grabbed territory. It also logically postulates that window for restoring status-quo is the function of early response, like effecting localised Chumar quid-pro-quo (QPQ) during Depsang face-off in 2013. PLA’s staying power will face real test, in face of General Winter, when forces have to transit from broadcasting to sustenance mode.  Our commanders are capable of formulating a suitable response strategy including QPQ and winter options. In the interim, it is axiomatic that all our vulnerabilities, going beyond so-called agreed areas of dispute are well guarded, as more surprises can’t be ruled out. 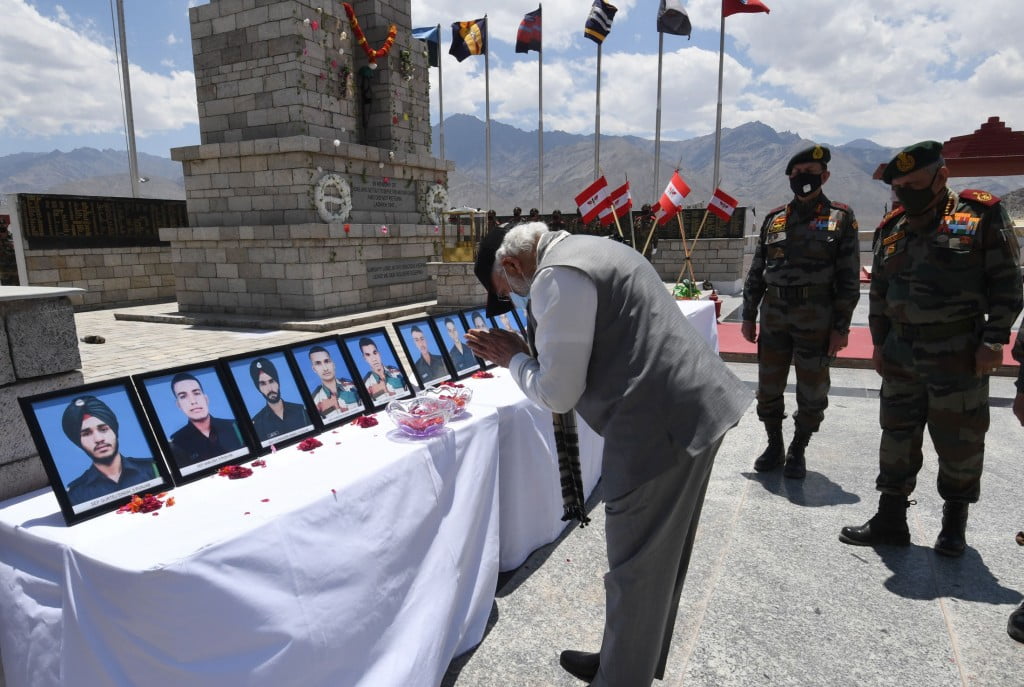 The unfortunate reality is that ongoing crisis has reinforced observation of George Tenham, about lack of Indian strategic culture, notwithstanding, our frequent invoking of Kautilya. It is baffling to see channels engaged in TRP generating meaningless competition in China-bashing, going overboard in coining synonyms for deceit and deception. The harsh truth is that harping on ethics and fair play sounds hypocritical.  We apply ‘Saam-Daam-Dand-Bhed’ in ample measure, in resort politics. Unfortunately, we act naive, where it matters the most, in geo-strategy and force projection, the function of modernisation and funding.  Another worrying trend is over-reliance on alliances and friends. Nonalignment, strategic autonomy, and balancing are meaningless, without backing it up with an appropriate arsenal. The external expression of solidarity is pouring but we have to fight our own battles.  Economic measures though laudable, entail long gestation and may be difficult due to our economy has become so dependent on Chinese. Options in the maritime domain are complex and will certainly enlarge the spectrum of conflict. Hence, we need to utilize a slew of measures.

We need to rework our information strategy as initial hesitation has resulted in vitiation and hijacking of debate. The information domain abhors a vacuum and legitimises available players. Currently, the official narrative is being articulated through selected veterans and journalists, dubbed as ‘Sarkaris’. Now that PM has signalled ‘gloves off’ approach, Kargil type arrangements of regular briefings by designated senior military and MEA spokespersons can restore sanity in info-sphere. It was heartening that PM emphasized the composite nature of Galwan fight back. Hopefully, it will cap the tendency of leaders and channels to misuse it for impending elections.

The most distressing is trading of accusations and tirades, stretching back to the 50s. Some, like obfuscation of LAC as fuzzy formulation, as also abdicating claims on buffer zone in Galwan valley need flagging. It is grossly unfair to the Army, who have followed diktats of China Study Group, always going much beyond the call of duty, despite being given short shrift in equipment. We can do without daily icon busting TV debates (in hindsight), ignoring integration of princely states, Puducherry, Goa, the merger of Sikkim, and creation of Bangladesh. Incidentally, Braveheart Gurtej’s battalion participated in Hyderabad action and 1971 operations. Let immediate, tactical gains not destroy the strategic story of our resilience, even though frayed at edges. More importantly, nay-sayers need to defer meaningless twitter spats to the more appropriate time, standing with the government through the current crisis.

China is testing our resolve and patience through filibustering in negotiations.

We need to unequivocally communicate that unlike PLA, our Army is highly de-centralised, evidenced during stand-offs at Nathu La in 1967 and recently in Galwan. These surgical counter raids are spontaneous, self-motivated, and uncontrolled with strategic reverberations. They signify the resilience of our troops, initiative of junior leaders, and capability to subdue even killer squads.

There is possibly some offer of withdrawal to Finger-2 and Finger-6 by India and China respectively. This would not only legitimise salami-slicing but whet PLA appetite further. It will be appropriate to recount that from patrolling right up to Chinese base-Srijap in the 80s to Finger-8 and now boxed in, at Finger-4, has been a sad litany of appeasement and yielding territory, as documented in Shyam Saran report. It is high time to call the bluff off and communicate to Dragon in the only language that he understands. The real challenge lies in crafting face-saving exit for PLA, yet sticking to our red lines of restoration of status quo. PM has set the ball rolling.

Lt. Gen. K J Singh, PVSM, AVSM & Bar
Lt. Gen. K. J. Singh commanded the coveted Western Command one of Indian Army’s most active formations that positioned along the Pakistan and China borders besides being involved in counter terrorist operations. He was GOC of Sikkim Corps and also commanded Armored Division & first T-90 Brigade. He has served in counter insurgency areas of NE, J&K & Punjab and UN Peacekeeping in Angola. Gen K J Singh has been cited for bravery in Angola & commended by COAS and by the Eastern Army Commander (twice). After retiring from the Army Lt Gen K J Singh, served as Advisor, Government of Haryana; and is presently State Information Commissioner Haryana.

Russia has over 20,017 km of land border with the maximum 16 neighbors while China shares 22,147 km of land with 14 countries
Read more
BUSINESS

Nirmala Sitharaman is on a hat-trick. Everyone wants to know what surprises she has up her sleeves in the 2021-2022 Budget. Prior to this...
Read more

Greatest battles in the history of India # 2

From Alexander the Great to the Indo-Pakistani conflicts, India witnessed some of the fiercest battles which left a mark in history.
Read more