Pakistan going all out to revive the defunct Khalistan movement 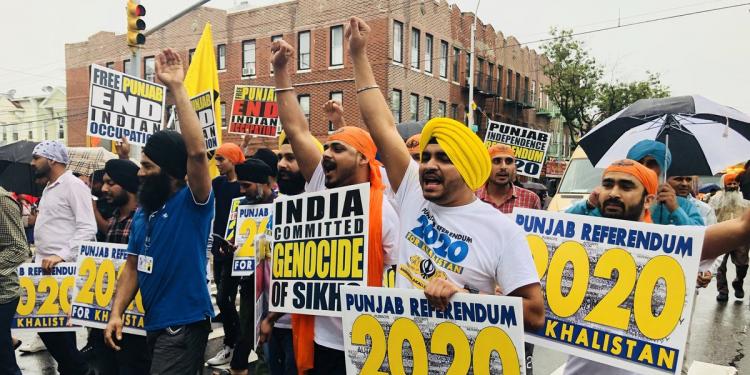 There is a saying – an empty mind is a devil’s workshop. This seems to apply to Pakistan which is unable to rope in the out-of-business jihadi fighters back home from Afghanistan but hasn’t learnt to behave itself.

Pakistan is trying its level best to make India bleed by reviving and resurrect the defunct Khalistan movement in the USA, UK, Canada, Germany and other countries.  According to Indian intelligence agencies, Pakistan’s ISI is aiding pro-Khalistan groups like Babbar Khalsa International in Britain. ISI is also trying to radicalise the hardcore separatist religious leaders and win-over the youth of Punjab.

Indian intelligence agencies are in particular concerned about the manner in which Pakistan is trying to indoctrinate or target family members of Punjab police officers living or studying outside India in Canada, US, UK and Europe.

Pakistan’s Inter-Services Intelligence Agency (ISI) is using Khalistan terrorists to smuggle narcotics to arrange funds for anti-India activities. The proceeds of narcotic trade are transferred for subversive activities in India through couriers and hawala channel for terrorist purposes.

ISI’s gameplan is to strengthen Khalistan terrorists so that Punjab is disturbed and India is ablaze. In March this year UP police ATS and Punjab Police arrested a Khalistani terrorist from Meerut.

In yet another incident Punjab Police foiled an attempt to trigger a series of terrorist strikes in Punjab and adjoining states and seized a huge cache of arms, including five AK-47 rifles, pistols, satellite phones and hand grenades.

All these moves coincide with the 36th anniversary of Operation Bluestar (June 6, 1984) when the Army entered the Golden Temple complex to flush out the extremists led by Sant Jarnail Singh Bhindranwale.

It is pertinent to note that Sikhs For Justice leader Gurpatwant Singh Pannun, a pro-Khalistan hardliner wrote to Pakistan Prime Minister Imran Khan, “if India ever attacked Pakistan, the Pro-Khalistan Sikhs will extend full support to Pakistan”.

Another leading Khalistan figure, Gopal Singh Chawla, is said to be close to Hafiz Saeed, the Pakistan based leader of the Lashkar-e-Taiba.

The India Book of Records promotes and fosters talents that the participants do not even know they are sometimes capable of.
Read more
National

There has been a perceptible change in luxury housing demand in India where a number of NRI buyers are looking for properties above Rs 1.5 cr
Read more
DEFENCE

According to the Minister for Environment, Forest and Climate Change Bhupender Yadav, the need of the hour is ‘deeds’ and not ‘plain words’ to...
Read more
BUSINESS

Promotion based on seniority or merit – what does the Army really need?

The objective behind this move is to evolve a merit-based promotion policy for officers at the decision-making levels in the armed forces.
Read more