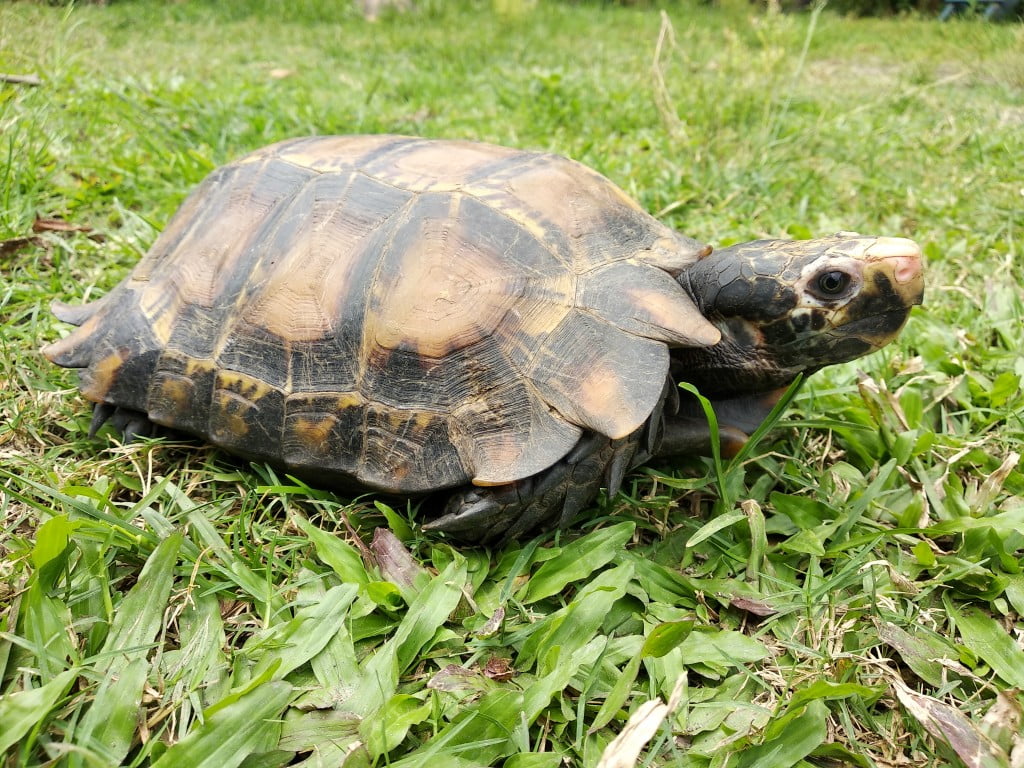 A joint expedition of the Arunachal Pradesh Forest Department, Help Earth and Turtle Survival Alliance/ Wildlife Conservation Society-India turned lucky when they chanced upon two individuals (a male and a female) of the Impressed Tortoise (Manouria impressa) in June 2019 near Yazali of Lower Subansari District of Arunachal Pradesh. The discovery is the first record of this tortoise from India, increasing the total number to 29 species of non-marine chelonians and five tortoises in the country.

This is the elusive medium-sized tortoise species which inhabits moist primary forests of the hilly tracts of the Indo-Myanmar biodiversity hotspot. The latest sighting further raises the status of the country as well as the state in the list of strategic turtle conservation priority areas.

The last reported range of the species was from Gwa in Myanmar, where TSA/WCS is carrying out a conservation breeding of this endangered tortoise for further reintroduction into the wild.

The survey team consisted of Mr. Bunty Tao and Dr. Bharat Bhushan Bhatt of Arunachal Forest Department, Dr. Shailendra Singh and Arpita Dutta from Turtle Survival Alliance/ Wildlife Conservation Society-India and Dr. Jayaditya Purkayastha from Help Earth. Both the animals were examined, marked and photographed before releasing them back at the precise location of occurrence.

This finding emphasizes the importance of conducting an extensive herpetofaunal survey in northeastern India, especially along with the border areas. Future surveys will be carried out near the area of occurrence and locations prioritized from interviews with locals from the area, leading to an ecologically viable population of the species in the area. The survey team expresses its appreciation for the logistic support provided by the Arunachal Pradesh Forest Department.

In the last few days Disha Ravi, Nikita, Shantanu, and Extinction Rebellion (XR) activist Greta Thunberg have been in the news because of their links with the farmer’s movement in India and sedition charges slapped on them.
Read more
ENVIRONMENT

FSSAI guidelines for safe handling, and consumption of poultry, meat and eggs during Bird Flu

The Food Safety and Standards Authority of India (FSSAI) has issued a guidance document on “Safe handling, processing and consumption of poultry meat and eggs during bird flu
Read more
ENVIRONMENT

More than 1300 species of birds are found in India

​​Birds play a very important role in Indian culture. In Indian mythology, different varieties of birds are associated as the transport or Vahanas of Gods & Goddesses. Bird tourism has a vast potential in India
Read more
ENVIRONMENT

Looking for pieces of Venus? Try the moon

Venus is the hottest planet in our solar system, even though Mercury is closer to the Sun. Venus has a thick, toxic atmosphere filled with carbon dioxide and is perpetually shrouded in thick, yellowish clouds of mostly sulfuric acid that trap heat, causing a runaway greenhouse effect.
Read more
CRIME

Flying Elephants – to be screened at the Wildscreen Film Festival 2020

“Flying Elephants’ is a short film, that narrates the story through the eyes of a mother elephant. The six minutes long film took about two years to make.
Read more
Wildlife

Co-directors of Wade, an award-winning short film, say what it’s like to imagine a dystopia in your home city and what they hope the film will achieve
Read more
ENVIRONMENT

The Andean condor - the world's heaviest soaring bird which can weigh in at up to 15 kg - actually flaps its wings for one per cent of its flight time.
Read more